Fury Against Racism and Bigotry

I never know where I will get the inspiration for a post. In Amazing Spiderman #23, there was a letter to Marvel commending them on Sgt Fury #6 as a fine example of standing up against racism. Given that this was a fairly early (March 1964) story to tackle the subject I thought I'd take a look at it.

It's a surprisingly underplayed story. The Howlin' Commandos lose one of their members to injury and must take on a new recruit, named George Stonewell. Stonewell seems somewhat reserved around some of the men, particularly the Italian and the Jew. And when he meets the black bugler, it becomes obvious that he's prejudiced:

However, in a semi-suicidal mission, Stonewell is forced to rely on Izzy Cohen. In the end Cohen pulls him out alive but wounded. He needs a transfusion, and of course only Gabe Jones has the proper bloodtype. We are led to believe that Stonewell is unchanged, but in the end he leaves a note to Izzy and Gabe with his new address. The story closes with an admirable sentiment: 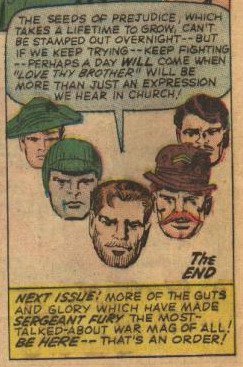 Marvel was miles ahead of DC in terms of diversity. Although it took a long time before black characters with substantial roles other than Gabe appeared, they did make an effort to include blacks in crowd scenes. If there were three cops in a scene, quite frequently one of them was a black man.

Previous Post on Nick Fury
Posted by Pat at 8:14 AM