He first appeared in Strange Tales #110. To say that Marvel did not overly boast about it at the time would be putting it mildly. As you can see, the first appearance of Dr Strange didn't even rate a mention compared to the thrilling Human Torch story: 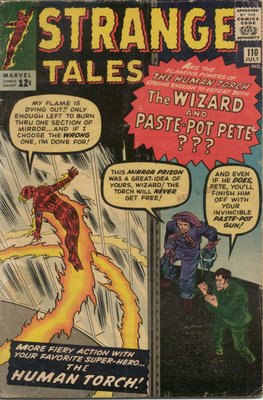 Suffice to say that this book is not worth over $1,000 in NM condition because it features the team-up of the Wizard and Paste-Pot Pete.

The Dr Strange story was relegated to six pages in the back of the magazine, but it was obviously intended to be a continuing character. 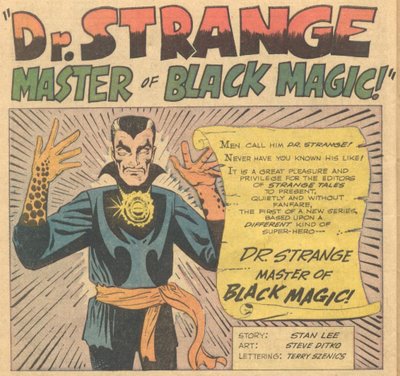 In the story, a man is haunted by nightmares. He hires Dr Strange, who "dabbles in black magic" to enter his dreams. Dr Strange soon learns that the man is troubled because he has robbed many of his business partners. Dr Strange must battle Nightmare, his ancient enemy: 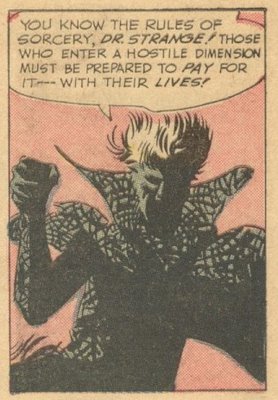 In the meantime, the man who hired Dr Strange realizes that the master of black magic knows about his crimes, and so decides to kill the doc. Fortunately, Dr Strange's master, the Ancient One, sees the peril and takes control of the amulet to save his favorite student: 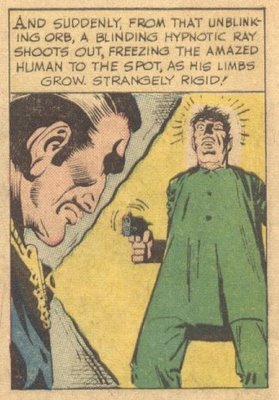 At the same time, Dr Strange manages to escape his foe Nightmare.

It's a compact story with just enough background to intrigue us. Ditko was the perfect artist for the character; his use of shading and the surreal backgrounds add just the right touch of mystery.

Update: Booksteve has some speculation as to Ditko's possible inspiration for Dr Strange. Be sure to read all the way to the end of that post for a hilarious anecdote about the Daredevil TV movie.
Posted by Pat at 6:37 AM