Green Arrow had been around forever in DC comics. Although most comics fans know that Superman, Batman and Wonder Woman were the only superheroes to make it from the Golden into the Silver Age in their own magazines, how many remember the other two heroes that were published continuously from 1940-1960? The answer is Green Arrow, and the fellow who debuted in the same More Fun #73 as he did, Aquaman.

Green Arrow's entertainment value consisted chiefly in his amazing assortment of arrows. If he had to stop a crook's car, he had an oil-slick arrow. If he needed help, he had a flare arrow. And getting a constant workout was the reliable boxing glove arrow.

Green Arrow and Speedy appeared on more covers of More Fun than the Spectre or Dr. Fate, showing up on all but a few from #77-103. They were essentially Batman and Robin clones, down to the wealthy playboy and youthful ward identities. Like B&R they had gadgetry with names like the Arrowcar and the Arrowplane. One thing the former had over the Batmobile was a catapult seat that could get the Emerald Archer and Speedy to the top of buildings fast.

GA appeared in the Seven Soldiers of Victory series, a sort of poor man's JSA, in Leading Comics, and had long runs in Adventure and World's Finest after being dropped from More Fun when that magazine converted to comedy stories. DC appeared to give the feature some more legs when they allowed Green Arrow to join the Justice League of America, but he quickly became a neglected character. GA was dropped from Adventure in 1959 after 14 years; he was used alternately with Aquaman in World's Finest in 1963-64 after having appeared in over 20 years in that mag.

And so it seemed quite likely that GA was going to go the way of Johnny Quick, or any number of other DC characters who had their moment in the sun but then faded into obscurity.

Many people probably assume that GA's renaissance came in Green Lantern #76. But in fact it began a while earlier in Brave & Bold #85. The story is entitled The Senator's Been Shot!, and given that it appeared about a year after RFK was shot in Los Angeles, it seems (and seemed) a bit like a tacky attempt to be "relevant".

Written by Bob Haney and drawn by the incomparable Neal Adams, the tale beings with the title action. Bruce Wayne is horrified by the sight of his friend being shot down before his eyes at a campaign event. The senator, Paul Cathcart, is pushing a big crime bill that Bruce has backed and is in intensive care. The governor wants to appoint Bruce as Cathcart's replacement, but of course this causes problems. How can Batman track down the killer if he's tied up as a senator in his other identity?

Ironically, at the same time Oliver Queen/Green Arrow is experiencing the same conflict between his two personas. As OQ, he has a bid in on a huge construction contract, but as GA he's able to prevent an assassination attempt. Which identity is more important.

Then, in a bit too perfect coincidence, both Batman and Green Arrow confide their secret identities to the senator's son, himself a successful psychiatrist. We don't get much of a reaction on the first revelation, but the second, which comes only an hour or so later, obviously rocks the shrink. 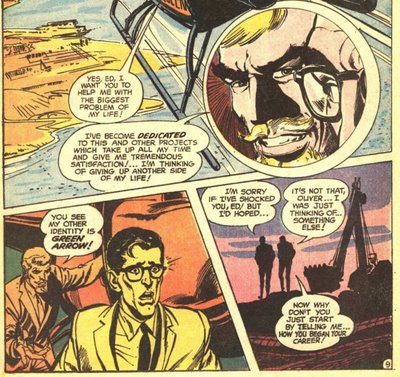 The next sequence sees Minotaur, the man behind the shooting (and Oliver Queen's rival on the huge contract) kidnapping the psychiatrist. Bruce decides to take the job as senator, while GA pursues Minotaur. As you might expect, Minotaur leads GA on a quest to a maze on an island in the Mediterranean. Batman arrives but now they both are on a tight time budget--Bruce because he needs to make the crucial vote in the Senate and Ollie because of the large contract.

Fortunately, GA comes through with a gimmick arrow, perhaps the last he ever fired? 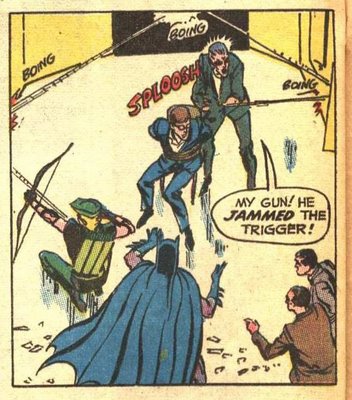 As must happen in all such dramas, Bruce arrives back at the Senate just in the nick of time: 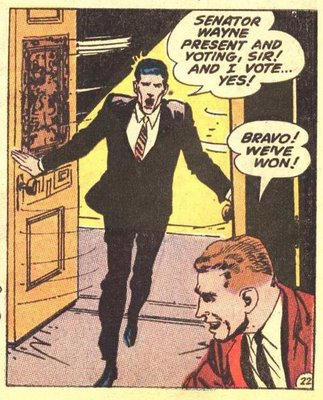 Although the new Green Arrow became known as a firebrand of Leftist sentiment, it must be noted that there is not a hint of that in this story. Although Ollie now sports a Van Dyke, he's still obviously an enormously wealthy capitalist. The project he's working on is supposed to save the state from bankruptcy, but there's no sense that he's building it for charity. There is a note prior to the letters section: 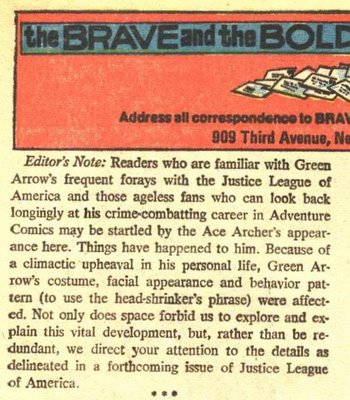 I do remember that the new GA appeared in the JLA/JSA crossovers that introduced Black Canary to Earth-1. But I'll have to do some digging around to find out if they really explained his new circumstances in a JLA issue or if it was just hinted at in the first Green Lantern/Green Arrow crossover.

Update: Thanks to Tom Galloway in the comments who pointed out that the basic details of Oliver Queen's financial downfall are contained in Justice League of America #75,w which starts with Ollie being confronted by a financial rival with the claim that he made some money on some municipal bonds (shocking news no doubt to Oliver's investors). At any rate, this news destroys The Queen Funds and our man goes belly up (by the end of the story). Of course, this being 1969, he didn't have much of a parachute.