Batman And the Feminists 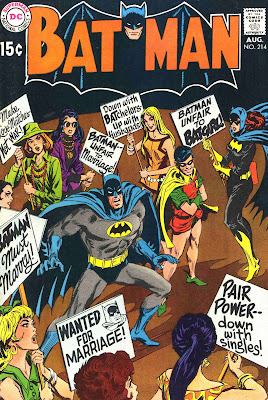 Or something. As the 1960s ended, Batman sales collapsed. After selling better than 800,000 copies per issue in 1967, the title crashed to 350,000 two years later. Nothing is less hip to youngsters than last year's fad. So it was necessary to make Batman more relevant, and seizing on the then-novel phenomenon of Women's Liberation seemed a natural. Of course, that writer Frank Robbins and editor Julius Schwartz knew nothing about feminism comes through loud and clear.

As the story begins, a beauty pageant winner is crowned. Her prize? A night on the town with Gotham's most eligible bat-chelor, all televised by a local station. And is Robin going to handle the crime-fighting duties? 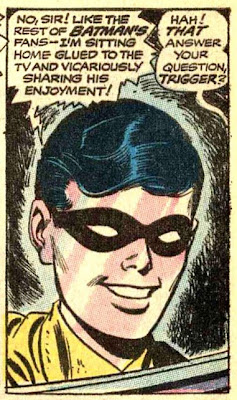 So the crooks have a field day, even to the point of robbing discos and other nightspots where Batman has recently been with his date (since they had a big haul with the celebrity attraction).

It is, after all, just one night and so the crooks begin to realize that perhaps tying Batman down with a woman would be just the thing gangland needs to improve the bottom line. So: 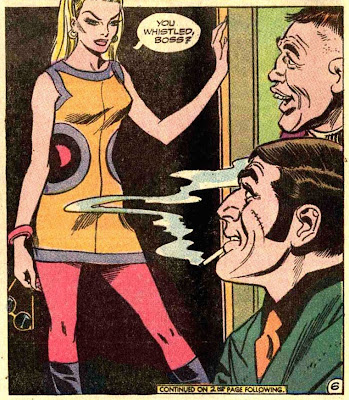 She goes to a local ad agency, which is intrigued at the prospect: 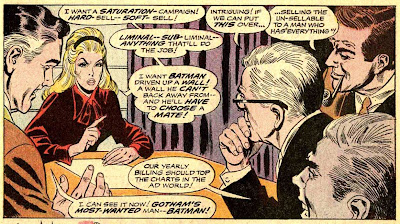 Well, never underestimate the ability of Madison Avenue to sell a product: 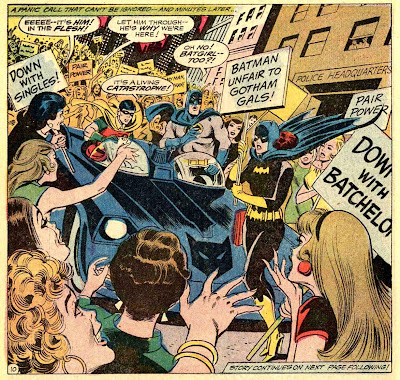 Batman bails out on the scene, but it seems he will be trapped between two adoring mobs of women, when suddenly: 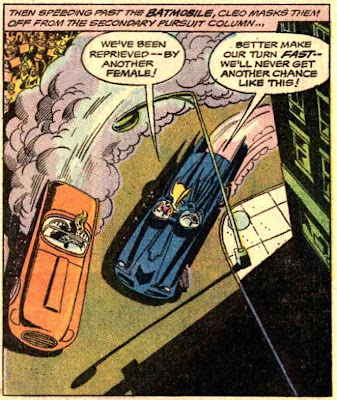 But when Batman tries to thank her, she blows him off. Will he be intrigued by the only woman in town who isn't panting after him? You betcha:

In the finale, Batman and Robin are observing a car theft ring when they spot the mystery woman's vehicle being stolen. They wade in but it's a trap. Fortunately a third fighter joins them: 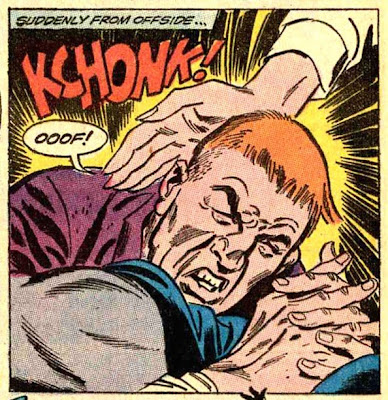 The crooks were double-crossing Cleo; her intention was only to entice Batman into marriage, while the gangsters figured they'd just bump him off. Batman learns that Cleo was part of the gang all along: 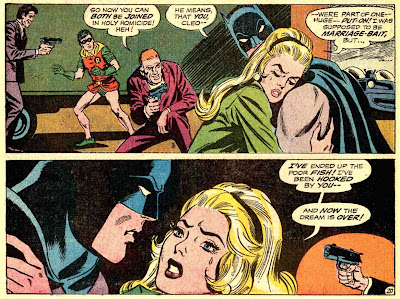 Batgirl helps out in the nick of time there. It turns out that she only joined WEB (Women to End Batchelorhood) to find out what the plan was. Cleo goes to jail with the rest of the crooks (although we have seen her break no law in the story) and Batman resumes his romance-free ways:

Comments: The story itself isn't terrible by any means; it's the juxtaposition with the then-new Women's Liberation Movement that makes this comic seem sillier than it really is. It is completely believable that Batman would find it difficult to operate if he married.

Irv Novick had settled in as the main Batman artist by this time, and his work supplemented by Joe Giella's inks definitely sets a nice tone for the story.
Posted by Pat at 7:19 AM