1. Who failed in his first effort to join the Mystery Analysts of Gotham City?

Private Detective Hugh Rankin was blackballed by Batman in his first attempt to join the Mystery Analysts, although he was later inducted.

2. Who was the first person to graduate at the top of Gotham City Police Academy in all four categories of training: Academic, Physical, Firearms and Overall? 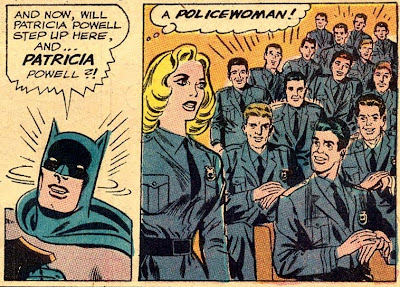 In an oddball pair of stories from the very early New Look, Patricia was introduced as a new love interest for Bruce Wayne. She confided in Batman shortly after the awards ceremony, puzzling the Caped Crusader, who could not remember meeting her, but it turned out that they had encountered each other several times, but were always wearing masks at the time: a diving mask and a domino mask at a costume party. But like all of Batman's love interests, she eventually just faded out of the picture.

3. Who did not first re-appear in the Silver Age after a long absence during the New Look period: the Riddler, the Penguin, the Scarecrow or the Catwoman?

I worded this poorly, what I meant to say was that three of those villains returned for the first time in the Silver Age during the New Look period, and one did not. The answer is the Penguin, who first returned in Batman #155, a year before the New Look debuted.

4. According to the Riddler, why do inmates refer to the state penitentiary as "Fiddler's Hotel"?

5. It is not uncommon for crooks to "die" at the end of a story, but what Batman villain was declared dead three times in the same story?

Deathman died three times in Batman #180; the first two were hoaxes, but the last one was for real as he was electrocuted by a lightning bolt while trying to shoot Batman and Robin.