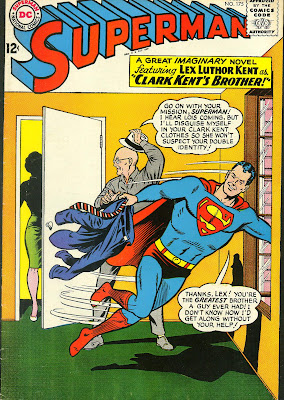 As you can see, this is one of the famed "Imaginary" stories from the Weisinger era. Lord only knows why Lex thinks that Lois will be fooled by him wearing Clark's clothes.

The story begins in the Superboy era, with Ma Kent coming down with a cold just as the family was planning a vacation to the Caribbean. This seems a disappointment to them, but we know that during that vacation, Ma and Pa Kent would contract the illness that killed them, so secretly this is very fortunate.

Lex at this point has lost his hair, so he still despises Superboy and has a plot to discover his secret identity. He causes strange attacks on various friends of the Lad of Steel and tracks Superboy's movements. Meanwhile Pete Ross (who doesn't know Superboy's secret identity in this story) tries to save Lana from the attack, but when it's over, she only has praise for Superboy:

So now we have a pretty good idea who the villain of the story will be. Luthor's pretty sure by now that Clark Kent's Superboy, the Lad of Steel decides he must run away from home to protect his parents. Superboy announces to Lana and Pete that he's going to dedicate his time to locating Clark, and he leaves Smallville.

Lex is still suspicious, so he decides to ingratiate himself with the Kents. He takes Clark's job in the general store. Using his scientific genius, he automates things: 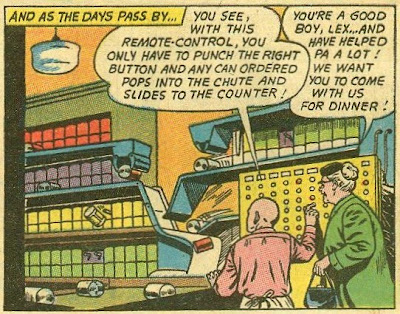 After dinner, the Kents decide they like Lex so much, they're going to adopt him. Lex accepts as it will make it easier to discover if Clark really is Superboy, although he does feel a little twinge of guilt. Later, when he sneaks down the stairs to search for Superboy's secret tunnel exit from the house, the Kents tell him to feel free to raid the refrigerator for a snack, and suddenly: 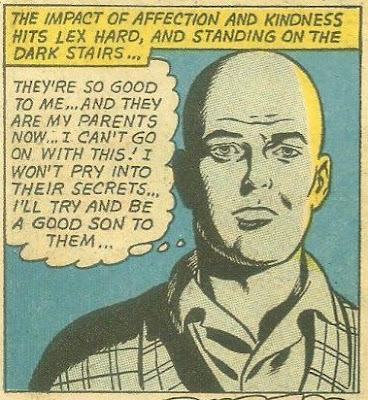 Superboy uses his distance vision to see that Ma Kent is still heartbroken that he left. He returns for a quick visit, but: 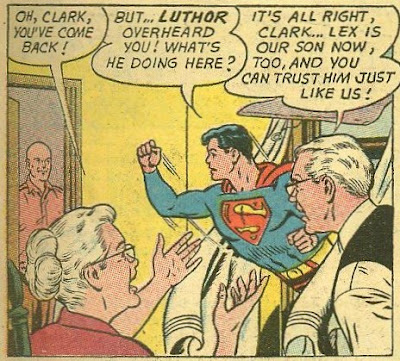 Since there is now no risk to his secret identity, Clark and Superboy return home. Incidentally, that scene on the cover? It turns out to be imaginary too, as it's a daydream that Lex has about how he's going to help his brother out in the future. But Pete Ross is not happy to see them, and vows revenge on Superboy for keeping Lana from returning his love.

An aside: The letters column includes this missive and response: 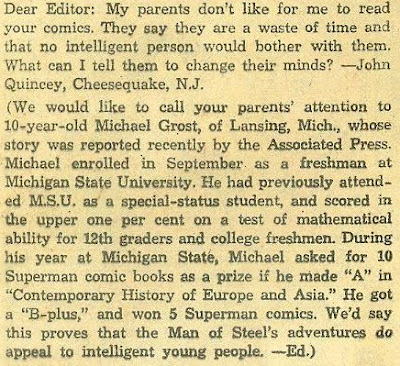 The anecdote about Grost is true; he pops up frequently in discussions of extremely brilliant youngsters, and Time Magazine profiled him in 1964, with the comic books prominently featured:

Michael Grost was pretty downcast. His parents had promised him ten Superman comic books if he got an A in school. Instead, he got only a B+ and five comics. But Mike's parents were delighted, for the course was Contemporary History of Europe and Asia, and the school Michigan State University. Mike is ten. As a special-status student at M.S.U. last year, the Lansing prodigy scored an A-average while amassing 38 credits in math, humanities, history and science.

Grost retained his love of comics; his web page on the classic comics of the 1950s and 1960s is here. See the end of this post for Grost's take on this story.

In the second part of the story, Lex gets an appointment as a research scientist in Metropolis, while Clark has been accepted as a reporter with the Daily Planet. Rather than break up the family, Ma and Pa Kent retire and move to Metropolis as well. The Kents play matchmaker, but Ma wants Clark to marry Lana, while Pa sees that his son prefers Lois Lane. Meanwhile Pete Ross has moved to Metropolis as well, and is still bitter that Lana prefers Superboy to him.

A crime wave starts in the city, which uses fantastic Kryptonian machines that could only have come from Superman's Fortress of Solitude. While battling the machines, Superman is affected by Green Kryptonite, and falls on Lois, nearly killing her in the process. This convinces him who he really loves: 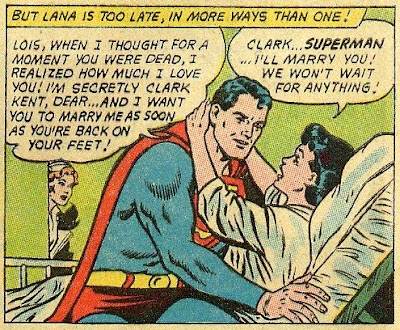 Lana (the girl shown entering the room) realizes that she's lost, and resolves to keep Clark's secret. She marries Pete Ross on the rebound. But when she discovers the plans to the Kryptonian machines that carried out the attacks in Metropolis, she realizes her husband's a crook: 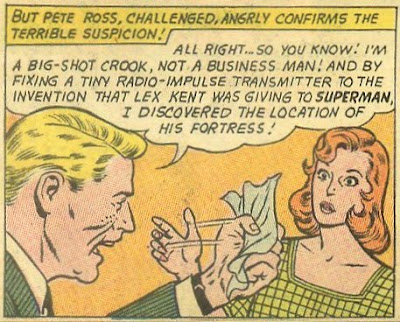 Pete plans a trap for Superman. He kidnaps Lois and uses her signal watch to summon Superman to his lair:

Lana, whom Pete has locked in their penthouse, manages to escape and get to the Kents. Lex has been working on a machine that will give him super-powers, but it's faulty. In the battle that ensues, Lex saves Superman and Pete is killed. But the victory does come with a price: 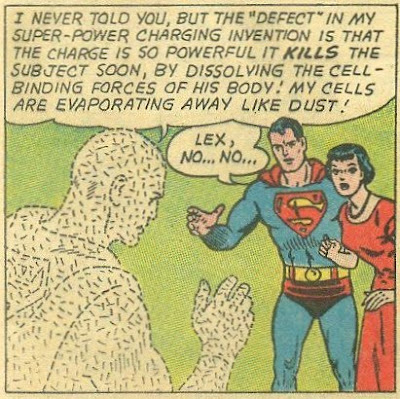 Comments: I've always enjoyed the imaginary stories, and this is no exception. The redemption of Lex seems a little incredible, and it's likely that Pete would have dropped his vendetta against Superman when he got what he wanted, Lana's hand in marriage. But aside from the weak motivations, the story works quite well, and Curt Swan's art, as always, is visually appealing.

Clark Kent's Brother; The Defeat of Superman; The Luthor-Superman (1965). Writer: Edmond Hamilton. Young Lex Luthor is adopted by the Kents, and becomes Superman's brother, in this book length tale. Hamilton manages to reweave the entire story of Superman's life, in this imaginary tale depicting an alternate unfolding of Superman's story. This tale is like "Superman's Other Life", in that it creates a whole alternative history for Superman, showing what his life might have been like if it had taken a very different course. It differs from many Imaginary tales in the Superman family, in that it does not present a possible future for the characters, but rather an alternative past and present. "Superman's Other Life" showed an alternative life for Superman on Krypton; here we see a reworking of Superman's life on Earth, concentrating on the non-superpowered humans he encountered in Smallville and Metropolis. This emphasis makes this one of the least sf oriented tales in Superman, just as "Superman's Other Life" was one of the most. However, both tales share a high level of imagination, looking at alternative lives for their hero. Some of the developments here involve Hamilton's personal theme of characters taking on roles and locations associated with others: for example, Lex Luthor becomes a member of the Kent family. This story is one of Hamilton's most imaginative and intricate embodiments of his role-assumption structure.

Update: See also this post at Random Longbox on another imaginary story featuring yet another hospital bedside proposal.
Posted by Pat at 4:35 AM