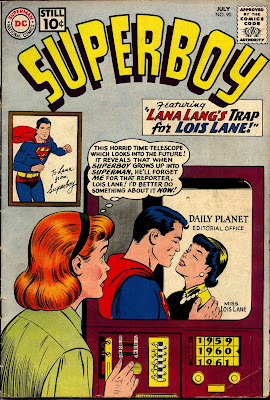 This was a common theme in the DC Silver Age; people were always looking into the future or the past via a television set. The appeal is pretty obvious; who wouldn't want to be able to turn on your TV and see his or her future life? In the story, Lana Lang is helping her father clean out an old laboratory, when she notices a "time-viewing machine" that Professor Wilton had been working on. According to her father, it never worked, but Lana does a little "tinkering" and before long she's watching: 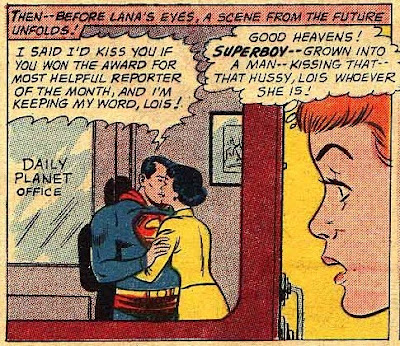 So she decides to try to change the future. She's learned from watching the TV that Lois' parents are from nearby Pittsdale, where a cousin lives. Lois' school starts early, so Lana can spy on her at class. When she sees Lois leave a sample of her work for the student newspaper, Lana pounces: 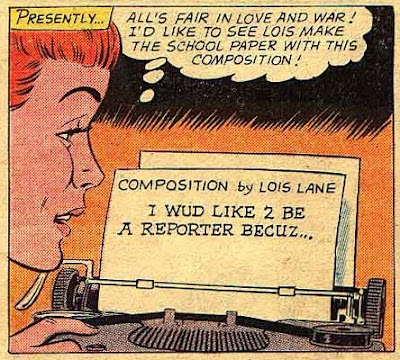 But as it happens, Superboy sends a gust of wind through the town to prevent an avalanche, and this blows Lana's fake sample out the window. Lana decides what the heck, but Lois had seen her composition blowing away and replaced it with a carbon copy, so she gets on the student newspaper.

So she puts a tiny speaker (the text says "microphone" but this is clearly wrong) in Lois's desk so she can give the answers to Lois, who believes the voice she's hearing must be telepathy. But Superboy has tested an experimental new explosive for the military which knocks out radio communications for a few minutes, and Lois fails the telepathy test despite Lana's attempts to help her.

Later, Lana tries to help Lois win a scholarship in sculpture. She hires a "starving artist" to help: 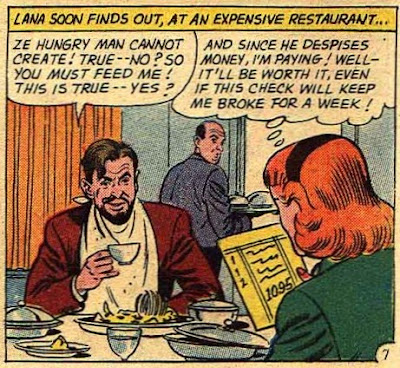 He creates a beautiful sculpture of a cat, but Krypto happens by, and indulging himself for a moment, he destroys any chance Lois had of avoiding journalism as a major. Lana is beaten for now, but she resolves to return to Pittsdale again; I don't know if this actually happened or not.

Comments: As I have mentioned many times, the inexorable nature of fate is a very common theme in the DC universe during the Silver Age. In a memorable pair of stories in 1959, both Batman and Superman were shown their fates had the most important and traumatic experiences of their lives not occurred. Of course, for Bruce that was his parents' murder, and for Kal-El it was the destruction of Krypton. In the former, Bruce becomes Batman anyway, while for Kal, he becomes the Superman of Krypton.

It was already well-established that one could not change the past in the DC universe; in a famed story in Superboy #85, Clark uses a time viewer (yep) to observe the assassination of President Lincoln. But when he goes back in time to prevent Booth from killing him, Lex Luthor is hiding out in that time period and he prevents Superboy from saving the president.

The idea that the future is unchangeable is a different thing; you can argue that leads to fatalism. However, it was certainly necessary in this case, as we all knew from years of reading Superman that he did actually know a reporter named Lois Lane.

The second story features Supertot. Martha and Jonathan are taking a cruise with the toddler when he leaps overboard to chase some fishes. The couple are heartbroken, although not for the reason the cruise ship crew assumes. They know Clark will survive, but they may never find him again.

Sure enough, he makes it to Metropolis where he is put up for adoption. But the first couple he's adopted by discover his appetite is boundless:

The second couple are spooked when Supertot decides to imitate the moving men he'd seen during the day: 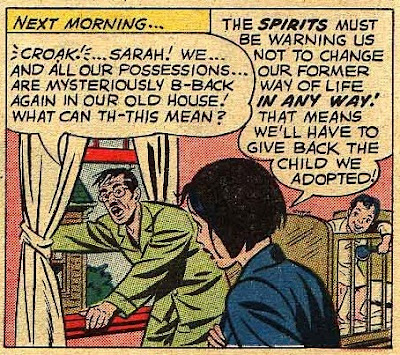 And an inventor and his wife are similarly startled: 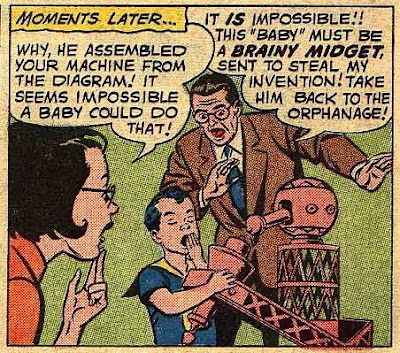 And so it happens that Supertot is back at the orphanage when Ma and Pa Kent come searching for him.

Comments: Cute story; you could argue that this again was fate working its mysterious way to make sure Clark would be raised by the Kents.

The third story is something of a key in the Silver Age; it features the first time anybody other than the Kents had known that Superboy was secretly Clark Kent. Pete Ross had been introduced a few issues before as Clark's buddy, and in this issue we learn (as does Clark via super-hearing) that Pete's a loyal pal, when a pair of costumed guys invite Pete to a party, but specify that they don't want Clark tagging along: 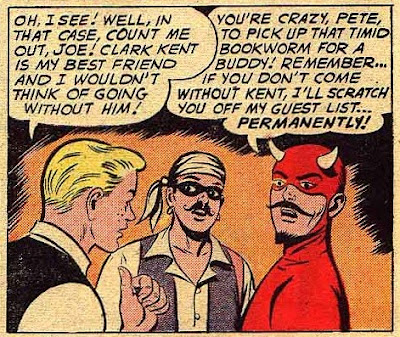 So Clark decides to take some more secret identity risks in order to be around Pete Ross, and when they go camping one evening, the inevitable occurs: 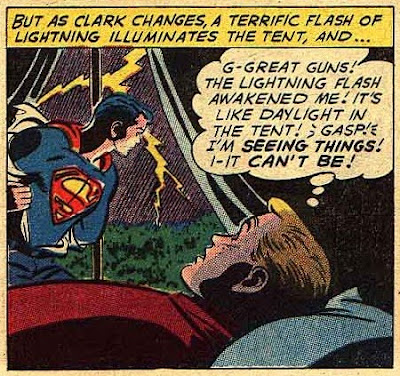 But for once, the story doesn't end with the secret identity discoverer getting amnesia, or being convinced he was wrong. In fact, Pete subs for one of Superboy's robots when it malfunctions. Pete Ross would remain the only other person to know Superboy/Superman's secret identity in the Silver Age.

Comments: A fine little story, with great characterization for Pete. Unfortunately, there turned out to be little that the writers could do with him, and so he really only made a dozen or so appearances in the Silver Age.
Posted by Pat at 10:09 AM