Superman Fan covers the oversized comic from the 1970s featuring the battle between the Big Red Cheese and the Man of Steel. But before that matchup ever took place (indeed before DC began publishing Shazam!), there was another tumultuous pairing between Supes and somebody who quite clearly was inspired by Captain Marvel: 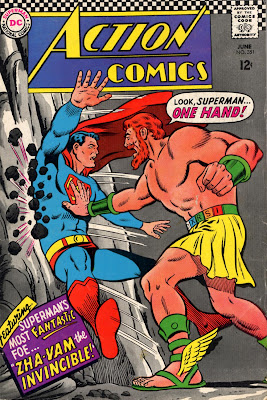 In the splash page to Action #351, we learned what his name stood for: 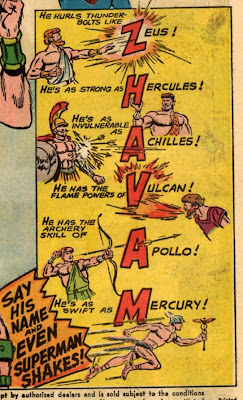 And in Whiz Comics #2, we found out what Shazam stood for: 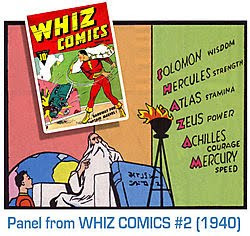 Except for Solomon and Atlas, the names are the same, although some of the locations and attributes are different.

In the story, the United Crime Syndicates needs a new boss, their old one having been jailed by Superman. A newcomer appears offering to lead them: 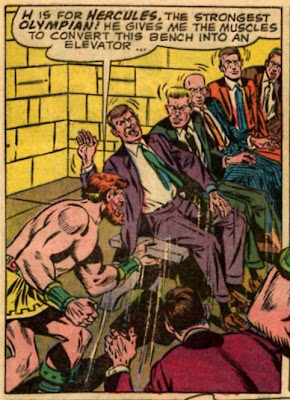 No surprise, the gangsters accept Zha-Vam's leadership eagerly. And apparently believing in the dictum to "Never steal anything small", they attack Fort Knox. Superman arrives and finds himself in quite a tussle: 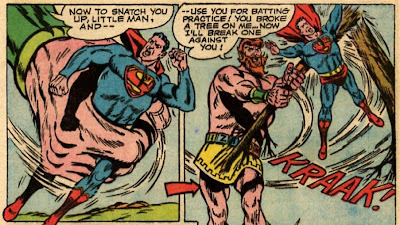 In the middle section, Zha-Vam delights in forcing Superman to press one of the buttons on his belt, which turns him into still different gods of the past. For example, the "G" button transforms Zha-Vam into Gorgon, in which guise he turns Superman to stone. Supes recovers when he manages to attract lightning to himself. Later, Superman presses the "P" button, and turns out all the light in the word, as Pluto replaces Zha-Vam. Superman must grovel: 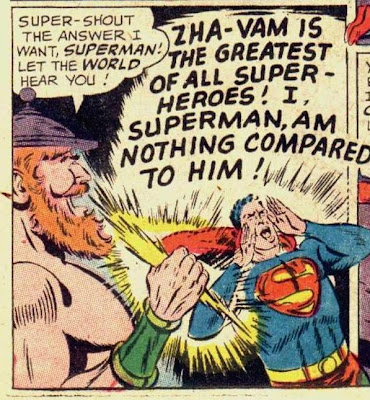 Superman's computer reveals a possible way to defeat Zha-Vam; his Achille's heel. But it turns out that the Greek God has planned ahead for this eventuality: 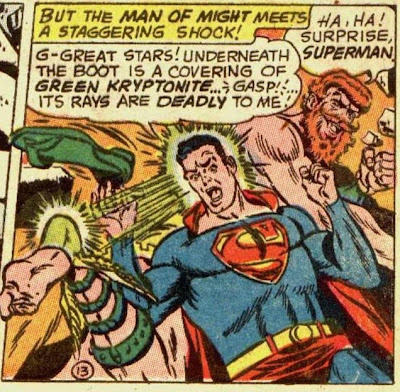 In the final issue, Superman returns from space to discover that Zha-Vam has placed the Shield of Orion around the Earth, and that he cannot get past it. He decides to go backwards in time to evade the shield and while he's at it, he takes a sidetrip to ancient Greece, and Mount Olympus. There he learns that the gods are angry that modern folks no longer worship them: 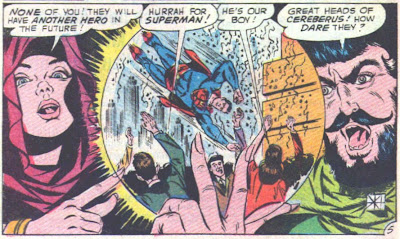 In response, they come up with Zha-Vam and send him to the future to humiliate Superman and remind people of their awesome powers. Meanwhile, Superman talks to the Oracle and learns there's another set of gods who are rivals with the Olympians. They even the score by giving Superman his own belt, leading to the climactic battle: 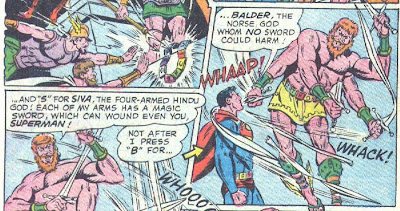 In the end Zha-Vam loses his cool and decides to simply use his Kryptonite sock to kill Superman. But Supes uses his belt to call Atlas (for once he's not changed into the hero himself) who opens a can of whoop-ass on Zha-Vam, getting rid of the sock in the process. And Supes uses his belt again, as a whip on Zha-Vam's exposed heel: 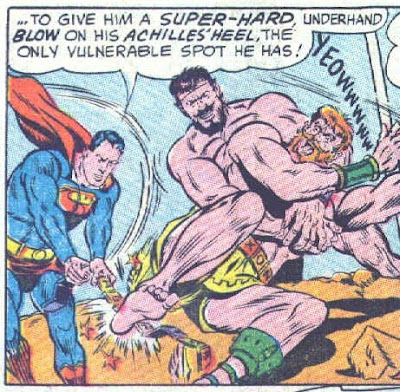 This takes the fight out of Zha-Vam, and Supes deposits him back in time to Mount Olympus. The gods, realizing their folly, turn Zha-Vam back into clay, and Superman indulges himself in a little side trip to Mount Olympus of modern times: 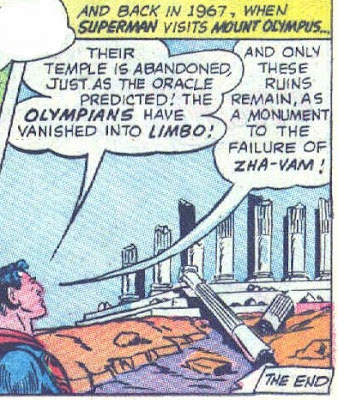 Yep, only one god on DC's green Earth in the Silver Age. Comments: Entertaining story and Boring's art works perfectly for Zha-Vam; he's really got it going here. The concept of the old gods being upset that Superman has replaced them is a clever but creepy motivation, although of course thinking it through would reveal that the Greek Gods had been dead for millennia before the Man of Steel came along.
Posted by Pat at 3:58 AM