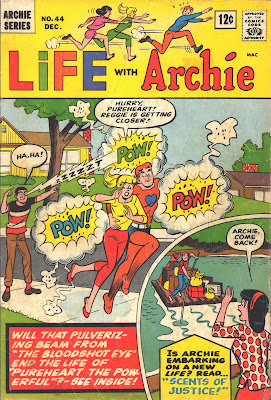 By 1965, even Archie was hopping on the superhero bandwagon, as Pureheart the Powerful. In the opening story Scents of Justice, Archie, Betty, Veronica and Reggie are spending the weekend at Mr Lodge's lakeside cabin. To keep Archie and Reggie from fighting, the gals send the boys off on a hike in the woods. But when they return to the cabin, they get a nasty surprise: 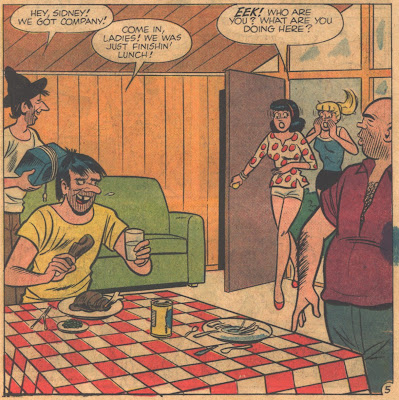 The hobos are robbing the cabin, and when the gals threaten to call the police:

It's a little odd to see Betty and Veronica in that kind of peril, although the hobos assure the gals that they will be freed once they get a ways down the river. Eventually the hobos get stuck on their raft with a skunk, and the river police are summoned to take them into custody.

The second story is the one highlighted on the cover, with Pureheart the Powerful versus the Bloodshot Eye. The story doesn't make a whole lot of sense; Archie is attacked by the villain (disguised as Reggie) who has some interesting plans for Betty:

But when they encounter the real Reggie, Betty realizes that she's been fooled. Still, she does have the one method of defeating the Bloodshot Eye:

Comments: Archie did superhero about as well as Harvey and Dell, which is to say not well at all. Of course, the next year would see even stronger pressures for superhero comics, as the Batman series debuted in January of 1966.
Posted by Pat at 6:31 AM