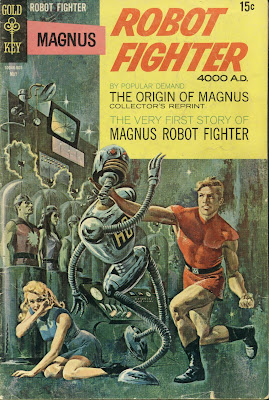 One of the longest running dramatic comics of the Silver Age that was not published by DC or Marvel, Magnus, Robot Fighter debuted in February 1963, and lasted until issue #28, November 1969. After a two-year hiatus, Gold Key started it up again and it lasted another 17 issues before finally biting the dust in January 1977. It has been revived a few times since then, most notably by Acclaim, which published 65 issues in the 1990s.

As you can see, although this is issue #22 in the Gold Key series, it is also a reprint of the very first issue. The comic was drawn for most of its initial 28-issue run by Russ Manning, who also did a long stint on Tarzan for Gold Key and also did the Tarzan daily strip for the newspapers.

Magnus was kind of a future Tarzan himself; he had been raised apart from the human society of 4000 AD by a robot (named 1A) and trained to battle the evil robots who had arisen when mankind became too dependent on them. Magnus has two main powers: incredible strength, and the ability to intercept the robots' radio signals.

In the first story, Magnus observes a robot tearing up a book that two kids were reading, about Adolf Hitler, after they observe that the robots are becoming Hitler-like. The kids are enraged that the robot did this, and:

Some polrobs (police robots) try to arrest the kids, but Magnus intervenes: 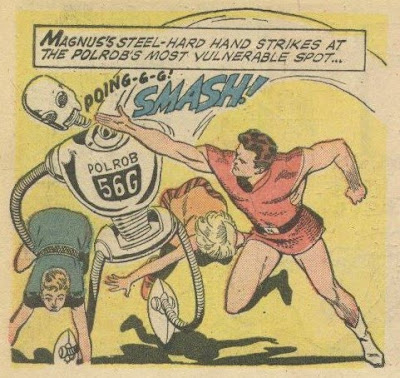 Magnus learns that the robot behind the evil robots is the polrob chief, who orders both humans and robots to capture Magnus, or he will kill all the humans in the sector. Meanwhile, Leeja, the daughter of a Senator, decides that she too is tired of obeying robot orders: 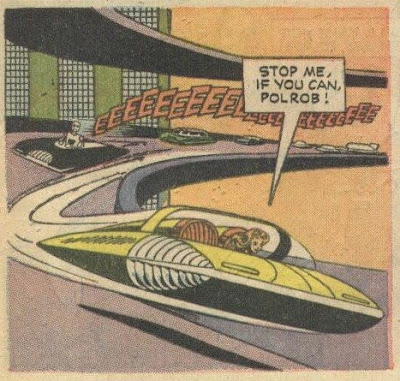 They join forces and enter the Central Rob (police station) under the supposed control of a robot that Magnus has rewired to accept his instructions. They encounter the evil chief polrob: 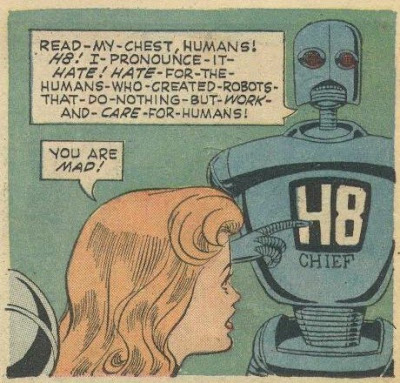 Now that's pretty interesting. Neo-nazis today use the term "88" as a code for "Heil Hitler", as "H" is the 8th letter in the alphabet. Given the earlier mention of Hitler in the story, it's hard to believe that this is a coincidence. H8 reveals that he lost his inhibition against harming humans due to a radiation incident years ago.

Magnus learns that one of H8's secret weapons is a computer bank of human minds, to which H8 intends to add Magnus and Leeja. As Magnus battles H8, the human minds assist him, and when H8 has been destroyed, he frees them. However, he learns that H8 is not the only evil robot and that others have been made evil by individual humans for their own purposes.

Comments: Solid introduction to the series, with terrific art and interesting characters. Leeja is drawn, well, rather enticingly for a female character in 1963: 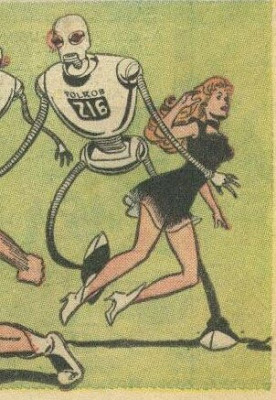 Then again, Gold Key was not hamstrung by the Comics Code Authority. I will have to dig up some other Magnus Robot Fighter issues and see if the quality continues at this level.