Note: I have authored every post here at Silver Age Comics so far. But I received an unsolicited email submission from a "M Hamilton" (a nom de plume) that was well-written and seemed pretty interesting, so I'm going to break with tradition and post it in its entirety. However, I will break in occasionally to make a point (or post a panel or cover to illustrate a point). Here's Hamilton's post:

If I were to recommend a single comic book to a Silver Age newcomer which would introduce him to the DC Universe before Earth-Two became a major force (and really started complicating things), it would be "Super-Exiles of Earth" (Justice League of America #19, May 1963).

It is the earliest JLA story included in the 2006 compilation "Justice League of America: The Greatest Stories Ever Told" and with good reason. The reader not only learns about each hero's superpowers by seeing him in action, but also finds out:

- The secret identity of each superhero along with the city he/she was based in (with the exception of Green Arrow and the Martian Manhunter),
- That Atom's girlfriend was lawyer Jean Loring,
- In the very last panel, Superman mentions his "Fortress of Solitude."
(I assume that the point here is to mention that the story served the purpose of acquainting readers painlessly with the background of the characters. This is definitely worth noting: Justice League of America, while also a (highly successful) magazine in its own right was intended to cross-sell the magazines featuring its individual members.)

This issue is atypical in several ways:

- With regard to the cover, most early JLA covers left out Superman, Batman and Snapper Carr. I think that this cover is the last one to portray the entire roll call of members. For hardcore JLA followers, the crowd drawn in the foreground and background portrayed the civilian identities of all the superheroes (except for Aquaman who had none). And in the foreground, I suspect that Barry Allen, Hal Jordan, Diana Prince, and Ray Palmer were drawn by their respective artists (e.g., Carmine Infantino, Gil Kane, Ross Andru), 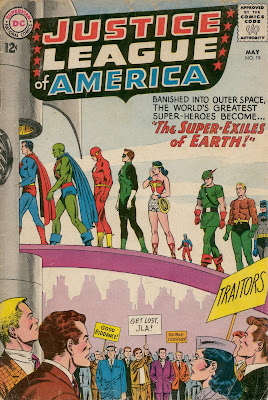 (I concur on the faces; they do seem redrawn. And it's far from the only time that happened on a JLA cover, so it's no stretch. It's definitely one of the more interesting covers on a JLA issue due to the puzzle aspect--if the JLA is really leaving, who are the people on the cover with the real identities of every member?)

- Concerning action, most issues broke the then 9-member JLA into 3 teams of 3 superheroes each. Each 3-member team worked together to fight against a villain or to cope with a problem. "Super-Exiles of Earth" includes mostly one-on-one battles between each member and his/her respective evil alterego which accounts for a page in this story that has 10 panels.

(Excellent point. In the JSA stories in the 1940s All-Star Comics, the individual heroes usually had a chapter of 5-6 pages where they battled alone. During the Silver Age this would not have been possible, due to the larger size of the JLA and the smaller size of the comics. So it was getting traditional to split into mini-teams of 2-3 JLA members to handle one aspect of the current issue's "menace".)

With regard to the plot, there was an incredible amount of logic and consistency in telling the story:

- Early on when the JLA was arrested, one panel portrayed the 3 members who travelled by plane (Wonder Woman, Green Arrow and Batman). Another panel featured the 3 who could fly on their own (Green Lantern, Superman, and Martian Manhunter) and another panel portrayed the remaining earthbound members (Flash, Aquaman, and the Atom), 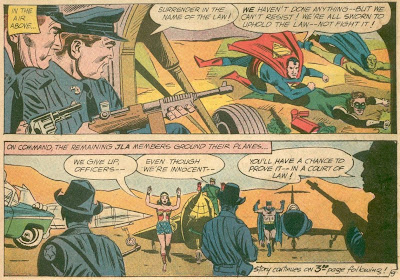 - When a message written in invisible ink needed to be analyzed, both Superman and Martian Manhunter simultaneously used their super-vision,
(Good point, but the message itself came from nowhere, which is a significant plot hole. On page 13 of the story, the Flash conveniently remembers a mysterious message that had no writing on it that the JLA received during a previous meeting. And Batman suddenly remembered that he put it in his utility belt intending to analyze it for a message, but he forgot to do so.)

- Like most of the JLA stories, the members solved their problems by using reason and deduction rather than by relying solely on their superpowers. Mental effort was always the key to ultimate success in JLA stories,
- And the member who contributed to solving the problem that was the ultimate climax of the story was then newcomer Atom who had joined the JLA a few issues earlier (JLA #14, "Menace of the Atom Bomb"). To justify the worth of new JLA members, it seems that writer Gardner Fox allowed the newest member to play the crucial role in providing the final solution.

(Good points both. Although I should note that the solution entails the following:) 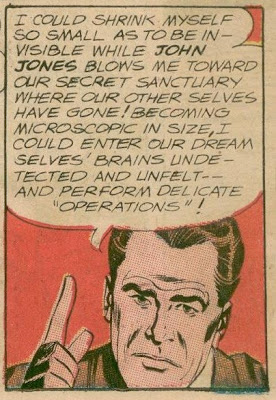 (Given that Ray is a research physicist, there are some questions I might have about his ability to perform the necessary brain surgery from inside).

Concerning Sekowsky's artwork, I feel that the following quote sums up the fact that he was underrated, overlooked and neglected among the roster of DC artists:

- The perfection of art is to conceal art. (Quintilian)

(Sekowsky did a credible job on a number of features in the Silver Age. Personally though, I am not a fan of his work.

His work on the JLA could never be called 'beautiful' in the way that Murphy Anderson's Hawkman or Carmine Infantino's Adam Strange could, but its dynamism was full of a kind of energy that especially suited the brisk pace of the JLA plots. (To get an idea of how the JLA members would have looked if Infantino had been their artist, see Flash #158 "The One-Man Justice League" or Mystery in Space #75 "The Planet That Came to a Standstill.")

[Concerning Adam Strange, Sekowsky was his original artist. What reader can forget the first page of Adam's debut in Showcase #17 ("The Planet and the Pendulum") portraying Adam rescuing Alanna by scooping her up in his spaceship. You were simply pulled into the story by the immediacy of that image. A few issues after JLA #19, Sekowsky would get to draw Adam again in JLA #24 ("Decoy Missions of the Justice League")]
(I concur, Sekowsky did a fine job with the initial Adam Strange story.)

If you compare the cover of JLA #19 drawn by Murphy Anderson with the same scene as portrayed within the issue, you can see that Sekowsky's other strong point was his portrayal of emotion. On the cover, the JLA members look stoic in accepting their exile; in Sekowsky's panel, they look like they are walking the gangplank and some of them look positively broken by having to face their cruel fate.

My favorite panels and pages in JLA #19 include:
- The panel where the members step into their dressing rooms followed by a panel showing them emerging wearing their street clothes as their respective civilian identities, 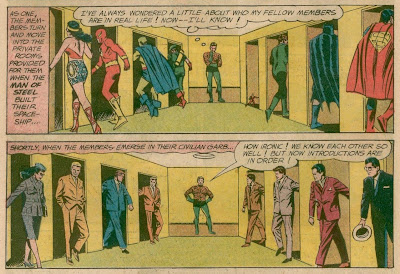 - When the JLA are in their spaceship taking them away from earth, those panels where the windows give views of an inky black outer space are so atmospheric,

- The page of six panels showing the villain in prison from different angles and revealing his thoughts. One of those panels didn't even include him. 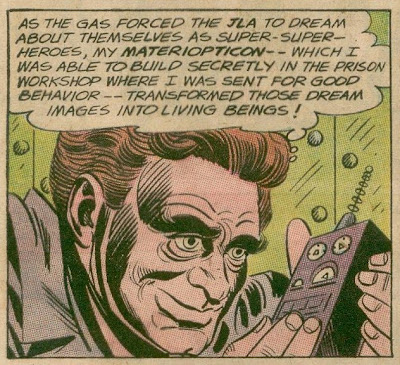 Concerning the evolution of the JLA, "Super-Exiles of Earth" represents the ending of an era when the entire JLA roll call would participate. Beginning with the first issue of the following year (1964), stories would begin to appear where only a partial roll call of members would participate and where Superman and Batman would gain the status of "anchor" members and begin to appear more regularly and prominently on JLA covers. The reduction of members was probably in reaction to the annual summer tradition of the two "Crisis" issues which must have caused Sekowsky to put in a lot of overtime drawing all those superhero (and supervillain) costumes.
(I have recently written about how Julius Schwartz was given permission to use Superman and Batman in the JLA by DC publisher Jack Liebowitz. With now nine very active members (and a tenth in another year when Hawkman joined), it's natural that not every member would be active.)

Re-reading JLA #19 over four decades later, I have to conclude that life in the pre-"Crisis" DC world certainly had its moments.
(Great review, M Hamilton!)

Obvious question for the peanut gallery: Should we make guest posts a regular thing at Silver Age Comics?
Posted by Pat at 10:20 AM

Email ThisBlogThis!Share to TwitterShare to FacebookShare to Pinterest
Labels: Guest Posts, Justice League of America
Newer Post Older Post Home
Contact me: pcurley49+6 at gmail dot com (do the arithmetic to get a usable email addy).