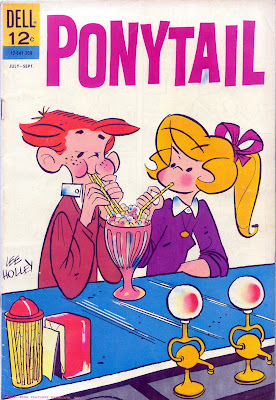 As I often mention, superheroes were only one small segment of the comics back in the Silver Age. DC, the company that started the Silver Age as the only comics company doing superheroes, dedicated only about a quarter of its output in the 1950s to the men in capes and tights, and while that increased to about half in the 1960s, that still means that the bulk of their product was non-superhero.

Dell Comics specialized in licensed products, like the Disney characters which they produced comics for for several decades. Ponytail was a comic strip that Lee Holley had started in 1960 and which had proven very popular. Ponytail Johnson is a typical, pretty but slightly ditzy teenage girl whose life revolves around high school and her boyfriend, Donald Dawson. The artwork may look somewhat familiar to those of you familiar with Dennis the Menace: 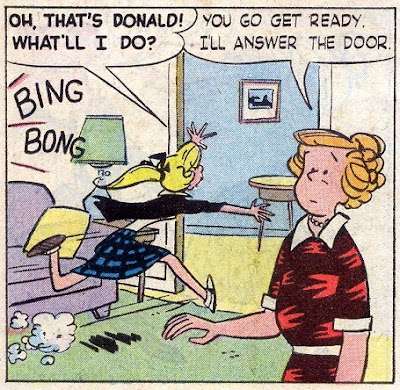 Holley had been an assistant for Hank Ketcham from 1959-1962, and he clearly learned Ketcham's loose, expressive style. In the opening story, Ponytail is thrilled when Donald compares her teeth to pearls. But shortly after she encounters a few of the girls who now have braces, and realizes that they're a new status symbol: 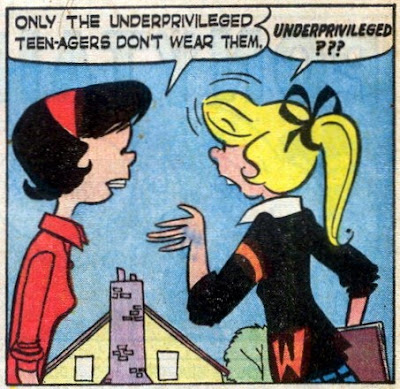 So she's gotta have them, perfect teeth or not. But now she's concerned about her date with Donald; will he like her with braces? 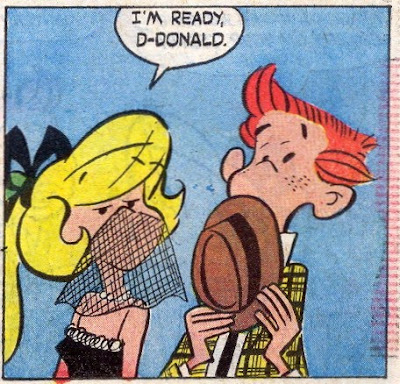 Well, as you can probably guess, Donald's gotten braces too, and when he finds out that Ponytail's metal-mouthed, he decides this indicates they're really made for each other.

In the second story, she's upset that all the girls are clamoring for Donald's attention after he sank the winning bucket in a basketball game. Her girlfriend suggests a new hairstyle, but as that would change the name of the comic book, they decide on a new perfume instead.

Because her mother's perfume bottles are all almost empty, Ponytail and her friend decide to mix them all together. At first this seems successful, as a bunch of boys start following them. But unknown to the girls, they are actually following a car that has a sign offering free baseball tickets. Then Donald starts following them, but by this time the gals are convinced that the perfume they've created is bound to make them millions. But: 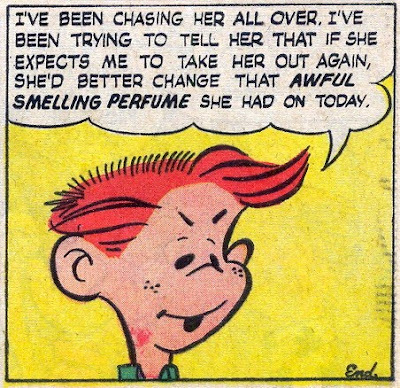 In the third story, Ponytail is embarrassed by her parents casual attitude and clowning around when they have Donald over for a barbecue. Of course, Donald enjoyed himself thoroughly and when he gets home he gripes about how different it is with his parents: 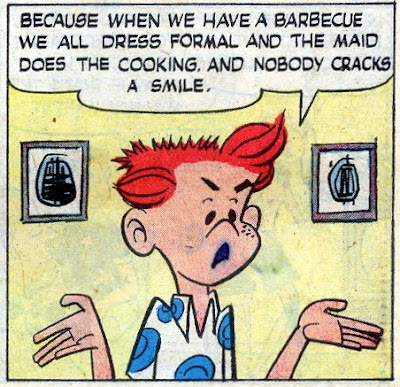 So Donald's parents decide to invite the Johnsons over for a barbecue to see how casual is done. Of course, Donald is urging his parents to loosen up, while at the same time Ponytail is insisting on formal wear and no jokes. This results in some comic moments: 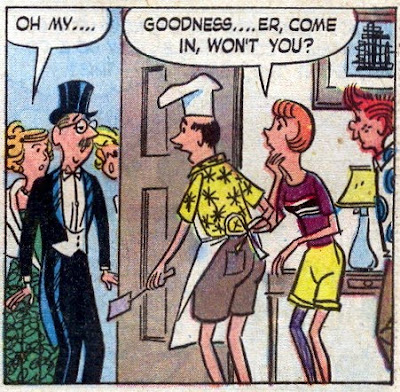 So the Johnsons find a pretext to scramble back home and change into less formal wear, but in the meantime, the Dawsons have dressed up. But things loosen up a bit: 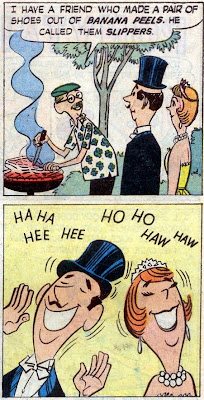 And before you know it, both Ponytail and Donald have gained a new appreciation for their parents.

In the third story, Marcia Morgan (clearly a villainess) has coaxed Donald into a date after school. But she's annoyed to see that Ponytail and Donald are passing notes in school so she decides to get Ponytail in trouble. She gives her a bubble wand and fluid and Ponytail accidentally fills the air with bubbles, resulting in her being sent to the principal's office. The principal is in a hurry as the new superintendent of schools is arriving shortly, and when he hears what Ponytail did he gets the hiccups. Casting about for something to drink, he grabs the bubble fluid and chugs it down with predictable side effects. He tries to hide, but: 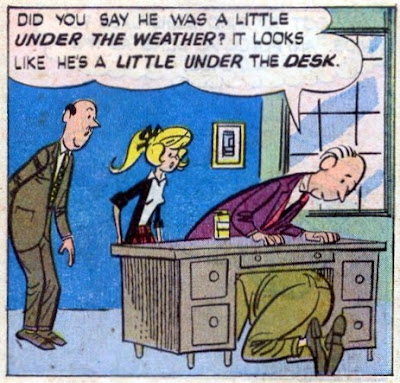 And when bubbles start coming out of his mouth, people assume the principal's gone mad. But Ponytail explains the bubble fluid and the superintendent is fascinated, thinking this would be a great toy for his grandchildren. When her teacher realizes this, she retracts her complaint and makes it sound like Ponytail was educating the rest of the class: 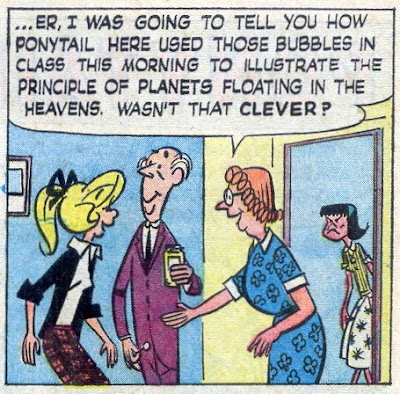 But Marcia, jealous of the attention, insists that she was the one to bring the bubble fluid to class. The principal, hearing this, assigns Marcia to detention while Ponytail goes out for pizza with Donald.

The fourth story is a short gag about Ponytail trying to attract the attention of the captain of the baseball team. She tries out a formal dress, but he ignores her. Then she sports a swimsuit, but no sale. It's time for drastic measures:

In the finale, Donald has made the mistake of scheduling a drive in the country with Marcia the same afternoon that he promised to take Ponytail to a movie. The only solution is to let the weather decide. If it's nice, Marcia gets the ride, while if it's rainy, Ponytail gets to see the new Gregory Peck movie. Deciding to take matters into her own hands, Ponytail resolves to wash the car, since nothing is guaranteed to start a rainstorm like a clean car. As her father's car isn't home, she washes Donald's car, and since the engine's dirty as well, she washes that. Sure enough the rains come and she heads to Donald's for their date. But: 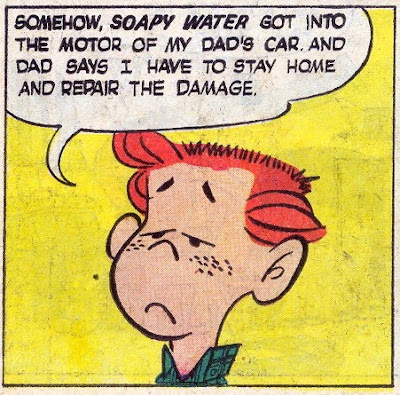 The inside back cover has what appear to be four of the single-panel comics from the newspaper strip. Here's my favorite: 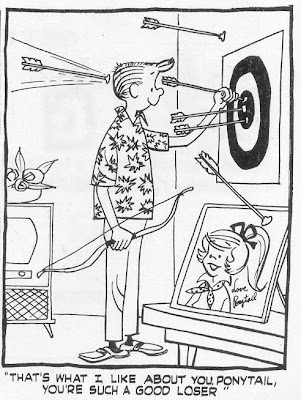 Comments: I didn't think too much of the two opening stories, which seemed overly long for a single gag, but the later stories in the book were terrific and funny. As it happens, I'm not the only person blogging recently about Ponytail; Sherm Cohen wrote three posts about her, focusing on the sixth issue in the last few days.
Posted by Pat at 4:52 AM