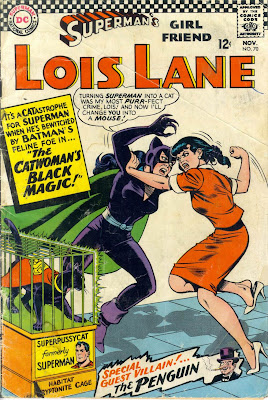 As I have discussed in the past, the Catwoman disappeared immediately after the Comics Code Authority arrived. It seems obvious that her sex appeal, glamorous lifestyle and her habit of getting away at the end of the story with occasional assistance from Batman would surely have been slapped down by the Code. So she joined many other Batman villains from the Golden Age and disappeared.

In Batman #155, the Penguin returned for the first time in seven years, and in Batman #171, the Riddler made only his third appearance ever. And then the Batman TV show hit the screens and the entire country experienced Batmania. As I recall, the first two episodes featured the Riddler. And the second week (Batman was shown on both Wednesday and Thursday) featured the Catwoman.

Now the Batman TV series always featured some lovely woman, usually the featured villain of the week's "moll". But here was a gal willing to match wits with Batman herself. The choice of actress was inspired. Julie Newmar could vamp it with the best of them, as she showed in an early 1960s movie called "Marriage-Go-Round" as a brilliant young graduate student who has decided that she wants to have a baby with an also-brilliant (and happily married and actually faithful) college professor played by James Mason.

And yet, despite this obvious lead-in and even though DC had reprinted several Catwoman stories from the Golden Age, somehow Julius Schwartz resisted the siren call of Batman fans for a new Catwoman story. Indeed, shortly after the Batman TV show started he brought in a new villainess who was clearly inspired by the Feline Felon: Poison Ivy.

Around the same time, Mort Weisinger, whose Superman had ruled the circulation roost at DC forever, thanks to the long-running and successful radio and TV series, suddenly found his numbers declining pretty drastically. He knew the culprit and he knew the answer: Bring back the Catwoman to face Lois Lane.

At the beginning of the story, we see perhaps the fate of journalism writ large 43 years ago. How do the Daily Planet reporters get their news? 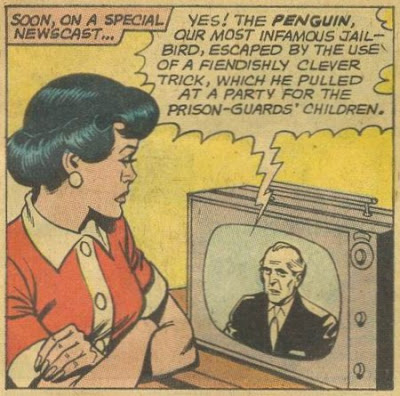 Well, it's not hard to see how having inmates provide entertainment at a party for the guards' children might go awry; whose brilliant idea was that?

Lois realizes that the Penguin might be attracted to the exhibition of rare birds on display at the Metropolis Bird Sanctuary, so she goes there. The exhibit has not yet opened, but the intrepid reporter sneaks past a dozing security guard and sure enough, excitement ensues: 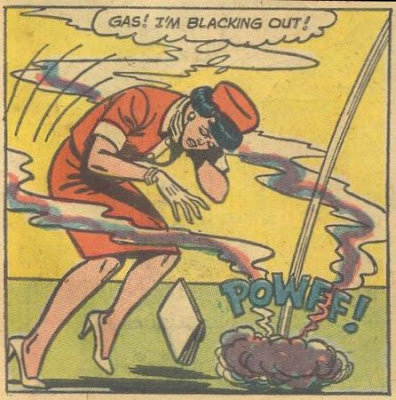 But when Lois comes to, she's not being held captive by old Pengy, but: 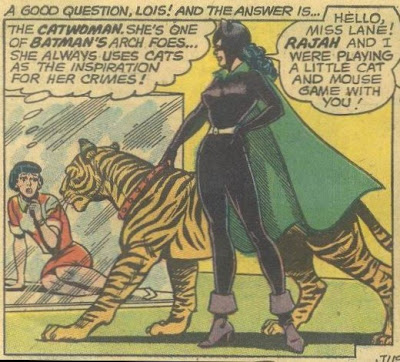 Very, very cool. Rajah had been featured in several Golden Age Catwoman stories and in CW's final appearance in Detective #211's The Jungle Cat-Queen, she was shown riding off atop Rajah's back towards her plane as Batman and Robin look on, helpless to stop her from escaping. Kudos to Leo Dorfman (credited with writing the story at the GCD) for making sure that he got a little detail like that right.

Some other characterizations seem to be have been obtained from the show, like the constant punning on the "cat" theme. Lois accuses the Catwoman of "pussy-footing", while the Catwoman is amused that Lois is "Purr-plexed" and later: 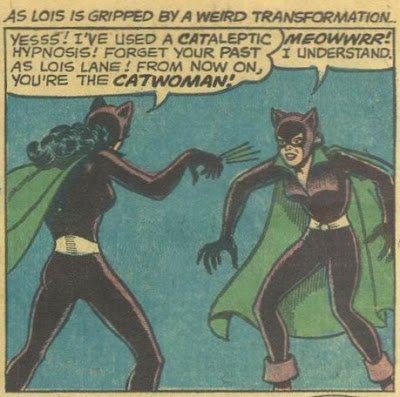 I'd have to look, but I don't remember a lot of that punning in the Golden Age Catwoman stories. Lois passes her final test, proving she can control the wild cats that Catwoman keeps, and she's given her first assignment: 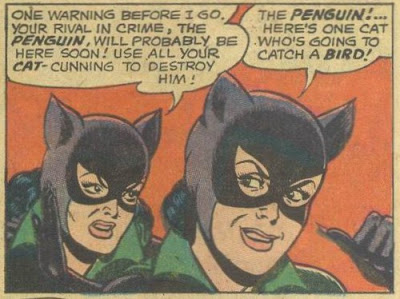 Dorfman's script takes a little hit in my book. The Catwoman was never a murderer, even using proxies, not in the comics and not in the TV show. Indeed, in Detective #211, Batman notes in the final panel:

"Murder isn't in the Catwoman's heart. Sentiment is her weakness and sooner or later that's why we'll catch her the next time."

And what of the Penguin himself? Why did he pass up an obvious bird crime? Well, apparently because he had other "Birds" on his mind: 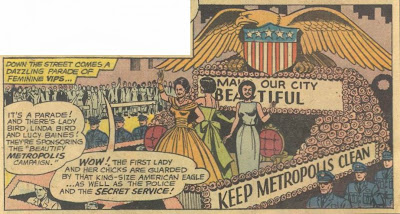 Yep, that's LBJ's wife and daughters in the float. But in actuality the Penguin was after the rare birds at the exhibition, he was just hiding underneath the eagle's wing on the float as a way of getting through Metropolis without being observed. Because the easiest way to avoid being detected is in the middle of a float which the Secret Service is protecting, right?

The Penguin finally arrives at the museum where the exhibit has already been robbed, and encounters the Catwoman (actually Lois). Realizing that he's been beaten, he decides to try a little romance: 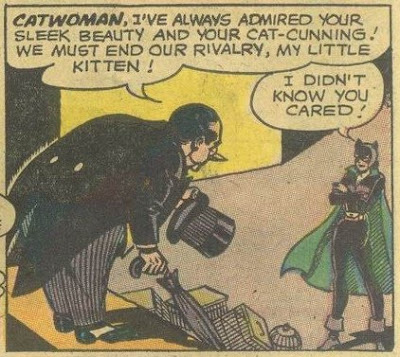 Big bonus points to Dorfman there; it strikes me as exactly the type of ruse the Penguin would use to keep within range of the exhibit. And another big bonus to artist Kurt Schaffenberger, who presents it perfectly framed. But remember, Lois is programmed to kill and so she sends a "cat-arang" towards the Penguin and he falls backwards, but is saved by: 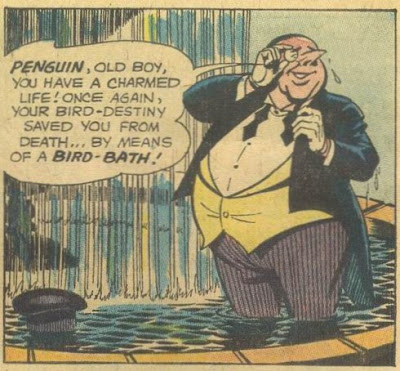 That is beautiful. Another perfect panel in another perfect sequence. Unfortunately for the Penguin, that is the second to last sequence he appears in; in the next he is captured by Superman, and carted off to prison by Batman and Robin. Superman changes into his Clark Kent identity to gather news information that will "explain his absence", but he runs into the Catwoman. Realizing that she's really Lois Lane hypnotized, he's not quite as concerned as he might otherwise be, when her cats rip his reporter clothes to shreds: 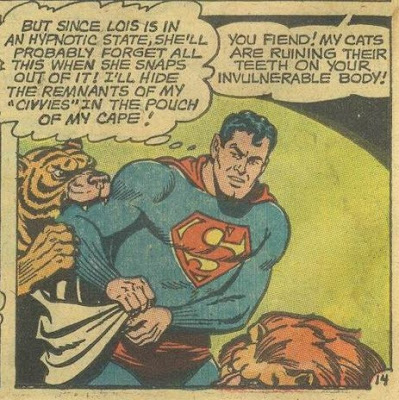 The Catwoman arrives shortly later and sees that while Superman removes the wild cats to a zoo, he leaves Lois alone, telling her he'll be back shortly to help her recover from the idea that she's the Catwoman. She changes places with Lois and: 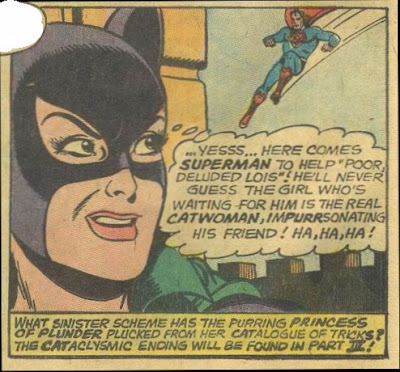 Of course that "poor, deluded," bit is an obvious nod to the TV show, which often featured Batman hectoring a supervillain's moll with those adjectives.

The story continued in Lois Lane #71. We learn that using guile, the Catwoman had tricked Superman into flying her to the catacombs, her lair. She used a magic wand there to change him into a cat, and imprisoned him in a Krytonite cage. And if you think that's pretty diabolical, get a load of what she does to Lois: 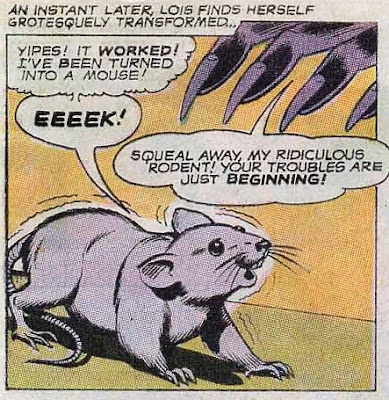 Well, you can imagine the next step, Lois the mouse is dropped into the cage with Superman the cat, who suddenly seems to have forgotten his code against killing. It's pretty fortunate that turns out to be a little nightmare Lois had, and in fact Batman and Robin have captured the Catwoman. But the part about Superman turning into a cat was not a dream, and the wand doesn't work any more, and the Catwoman isn't telling how to make it work. Super-Cat remains optimistic: 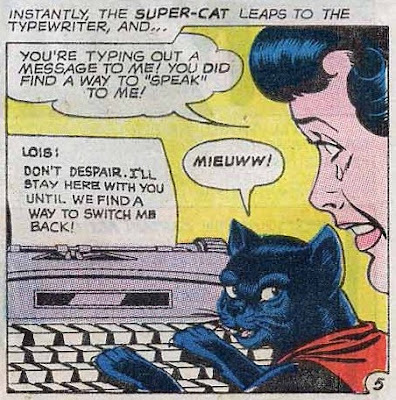 But still a little embarrassed by his problem: 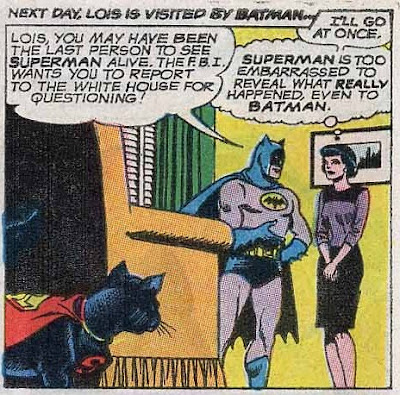 What, J. Edgar turning the investigation over to LBJ? Unlikely indeed! So Lois goes to the White House with her cat-carrier. At this point I can't help noticing that the basic plot of the story--Lois and the Catwoman--has been over for pages and that Dorfman is only keeping the tale alive by this ridiculous subplot of Superman turned into a cat for several pages. Anyway Superman eats lunch with the president's dogs, while Lois finds out that animals the space program sent to the moon are doomed unless Supes saves them. She tells Super-Cat who flies to the moon but they have a camera, and it turns out that the animals on the moon are mice. Will Super-Cat eat them instead? No he saves them and then Lois takes Super-Cat over to Lana Lang's place and whaddya know, Lana Lang's dad just found the only monkey's paw that grants one wish and Lana does the right thing, but that doesn't work out all that great for Lois: 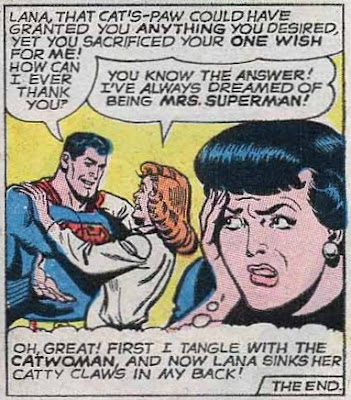 Comments: The ending is still entertaining because of Schaffenberger's art, but the story is so padded it makes Megan Fox look natural. Some out-of-character bits also ding Dorfman's script. Still, the tale hangs together despite those problems, and who can resist that panel with Super-Cat writing a message to Lois?
Posted by Pat at 6:30 AM