I have mentioned in the past that I really like the Kid Flash stories from the Silver Age; they were mostly "moral" stories, where Wally West (and the reader) learn a life lesson.

But I must note that there were three extremely lame points about Kid Flash that have to be covered in any detailed examination of Wally, who went on to become a long-term, significant character in the DC universe.

First, the origin. Now given that DC had decided to go with the youthful sidekick to the adult hero, the origin posed a bit of a problem. Remember, that Barry Allen had gained his super-speed via a freak accident. A bolt of lightning had hit some chemicals in his laboratory, and the combination had given him the "Fastest man alive" abilities. It's a million-to-one shot, but you know how it is, every bolt of lightning has to hit somewhere, right?

But hitting twice in the same spot? Lame:

Okay, so now they've accomplished what they wanted, which was to generate a sidekick for the Flash. But after awhile they realize that Kid Flash would be more effective (and distinctive) as a character if he had his own uniform. But do they just have him put something together himself? Not on your life: 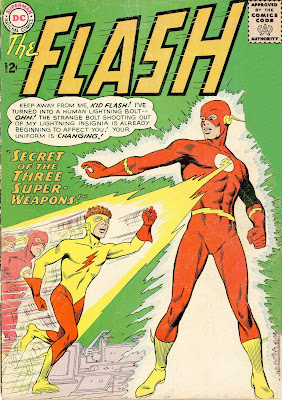 In the story, Barry had been thinking about designing a new uniform for Wally, but before he could actually get out a needle and some thread, an alien weapon had automatically turned his thoughts into reality. No, I'm not kidding: 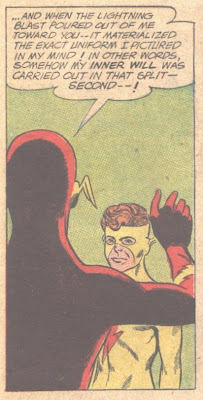 I seem to recall that Kid Flash later came up with some method of making his hair look brown instead of that rather distinctive carrot-top, as a secret identity bit of protection.

Now the last lame bit affects the Flash as well. Yep, I'm going there, to the story that undeniably ranks as the worst Flash story of the Silver Age. Now, when contemplating the awesome awfulness, remember that comics of the 1960s were still thought of as throwaway entertainment. The idea that adults 40+ years later would be be analyzing these stories would have seemed laughable to the people producing these comic books.

In Flash #167, we learned that the odds against the lightning bolt that gave the Flash his super-speed were even higher than we had thought:

And in fact, Barry apparently gained his superpowers from Mopee:

Leaving one obvious question for the readers: 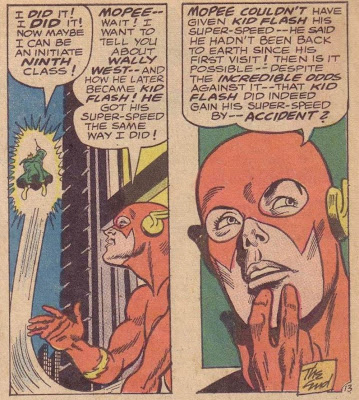 But anybody logically looking at it would say that not only were the odds high against the lightning bolt that hit Kid Flash being random, but that the odds of it happening in front of the only other person in the world with super-speed were, well, about 3 billion to one. Which means that we have to assume that Mopee, or another one of the, gag, "Heavenly Helpmates", gave Wally West his Kid Flash powers.
Posted by Pat at 12:20 PM