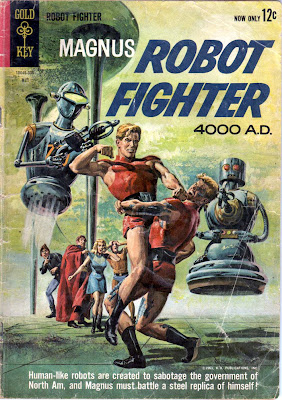 If there was one thing that the Silver Age had in abundance, it was covers that featured the hero and his double. But this one is painted and really stands out.

I enjoyed reading the reprint of Magnus, Robot Fighter #1 in #22 so much that I decided to try the next issue of Magnus. I don't remember reading a lot of Gold Key comics as a kid; it is my recollection that they had a somewhat different distribution system than Marvel and DC, and you'd come across them in oddball places like Woolworth's and WT Grant's. I had a couple issues of Turok, and one of Korak, Son of Tarzan.

This issue doesn't waste any time getting to the action. Leeja is being kidnapped by robots when Magnus lends a fist: 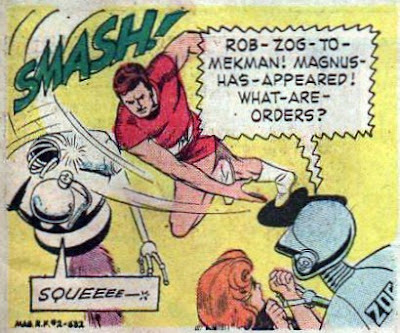 The seductive poses of the former continue, and check out the outstanding composition of this panel:

Our eyes are drawn to the woman, whose gaze encourages us to look at the fleeing air-car, which leads us to the dialog bubbles. That is perfectly done.

Magnus and Leeja are curious why the robots attacked her; since H8 was defeated in the last issue, she's no longer wanted, and those weren't pol-robs at any rate.

Via scene change, we learn that the robots were created by Mekman, a robot who has learned how to create human-looking and sounding robots, starting with a mechanical version of Magnus: 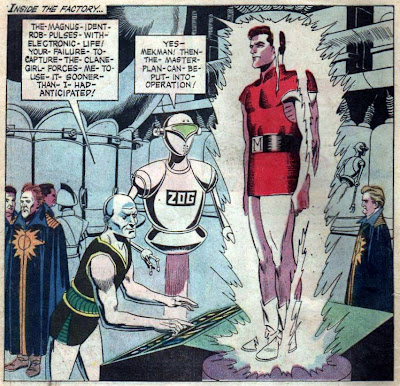 The robot Magnus lures Leeja to the Mekman's headquarters. With her as a hostage, Magnus himself has no choice but to surrender to the Mekman himself. Meanwhile the evil robot has created duplicates for North Am's governing council. After the substitution is made, the council makes an announcement:

When Magnus learns that Senator Clane has been arrested and is facing execution, he realizes it's time to kick a little robot butt: 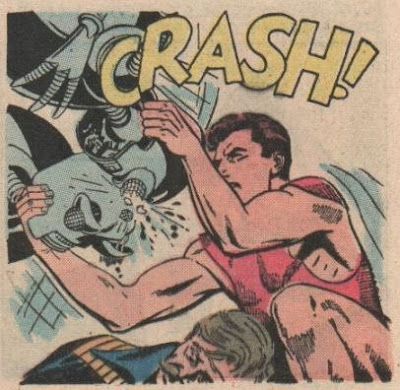 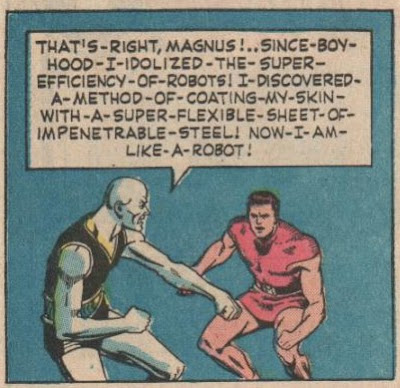 Magnus realizes that Mekman's pores still need to breathe, so he coats him with mercury, forcing the secret from his enemy before saving him for the good of humanity: 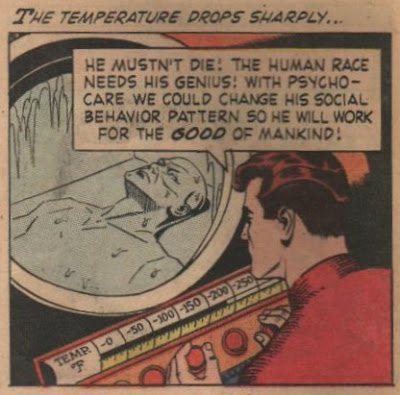 Magnus and Leeja arrive back at the capitol just in time to save Senator Clane, who is about to be executed. Magnus tells the humans nearby that the President and his council are all robots, as is the fake Magnus. They have an obvious test for him: 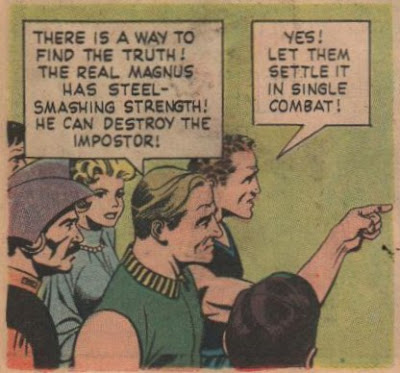 And in the end:

Comments: The story is solid, the artwork terrific. What's not to like? I do hope that in future issues we get a little more depth to the characters but so far this series is turning out to be a real gem.

There is a backup feature in this issue called the Aliens, which I see started in Magnus #1. I may get around to reading that series but for now I'm going to stick with the robot fighter stories.