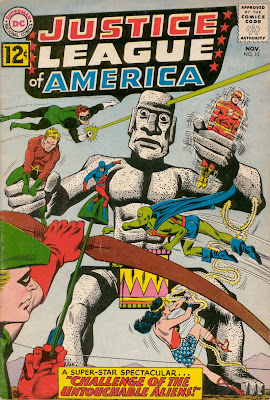 As the story begins, the US is testing a "Star Wars" weapon: Yet another example of Gardner Fox being ahead of the curve on technology. The satellite base containing the cannon in the sky is filled with reporters and military personnel including Diana (Wonder Woman) Prince and Clark (Superman) Kent. Suddenly the satellite comes under attack and the pair have to save other people. Superman observes that some strange force is yanking the atomic cannon away from its base, but he and Wonder Woman are too busy to follow it.

Barry (the Flash) Allen observes the cannon being aimed at the tallest building in Central City (the Wilmoth Skyscraper), and hurriedly changes into his fighting togs. Using his super-speed to gather up the tenants of the building he empties it before the cannon can fire:

After the cannon is fired once, Superman and Wonder Woman arrive. Although nobody seems to be operating the big gun, it fires again, and Wonder Woman diverts the missile into space with her lasso. Since they can't stop whoever's firing, they destroy the cannon itself. To solve the mystery, an emergency meeting of the Justice League is called. They learn that similar incidents are happening elsewhere:

The JLA split up into teams. Green Arrow, Aquaman and the Martian Manhunter journey to Japan, where they discover a giant stone idol watching the heavens. The idol smiles when it sees an atomic missile headed for Tokyo. At first, J'onn J'onzz plans to use his super-breath to blow it out into space, but the idol reacts quickly: 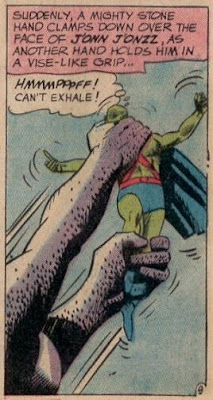 Fortunately, Green Arrow is able to use his parachute arrow to get the missile to land harmlessly in Tokyo Bay. Aquaman prevents another attack on the city by an underwater stone idol. However the three of them are captured by the idols and apparently about to be killed, when suddenly the stone giants disappear.

Meanwhile, Superman, the Atom and Wonder Woman have traveled to Brasilia, where they also discover the giant idols. The weapon the giants intend to use on this city is acid rain (once again, Fox is ahead of the general public):

The Atom manages to get into the rain-maker and destroy it, but again at the end of the segment the three heroes are captured by the stone giants, who suddenly disappear.

The final JLA team consists of Green Lantern, Flash and Batman, and they head to Central City, where they find a pair of stone idols trying to destroy the local skyscrapers with an earthquake machine. Green Lantern holds up the building with hands projected from his power ring, while Batman and the Flash go after the idols: 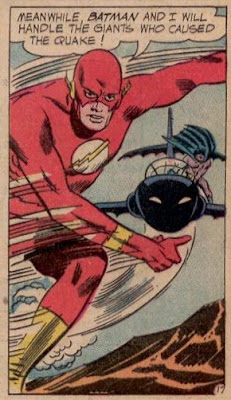 Pretty bad perspective there; obviously Batman is supposed to be far behind the Flash, accounting for their difference in size. The giants capture both of them, but at the same time, GL destroys the earthquake machine. Once again, the idols grab all three heroes, but quickly disappear. However, they take Green Lantern's ring with them for study.

We learn that the giants are actually scientists on another Earth, one that is one minute ahead of ours. Due to an atomic explosion on Earth and a cobalt explosion on their world, the time differential between the two worlds is decreasing, and when they reach synchronicity at three separate cites (Brasilia, Tokyo and Central City):

Green Lantern has ordered his power ring to bring him, Batman and the Flash to the stone giant's world after reading their minds for five minutes: 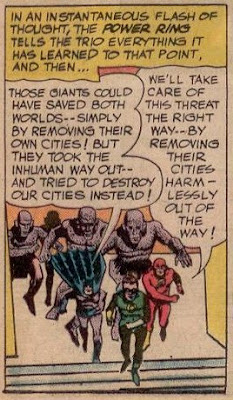 But it turns out that the giants have sabotaged their cities so that in the event of an alien invasion, they will be destroyed. Fortunately GL realizes this in time and decides to simply fix both worlds so that they are again one minute apart (nice to have a power ring that handles this sort of complex stuff with just a thought). And in the end, the JLA realizes that the stone giants were just like them, only different: 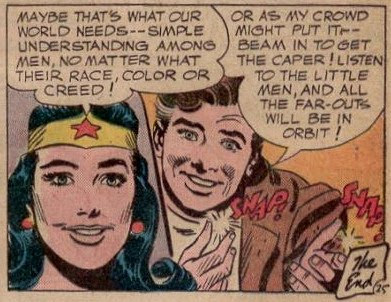 Nice sentiments by Wonder Woman, and the call for tolerance is pretty early; this issue is cover-dated November 1962. If anybody has any idea what Snapper Carr was saying, let me know!
Posted by Pat at 2:19 PM