In 1957, the Milwaukee Braves won their only World Series title behind stars like Eddie Mathews, Hank Aaron and Warren Spahn. Tobin Rote, subbing for the injured Bobby Layne, led the Detroit Lions to their last NFL championship by passing for four touchdowns and running for another as the Lions swamped the Cleveland Browns, 59-14. All Shook Up by Elvis Presley was the #1 tune in the nation, while Gunsmoke was the top-rated TV show.

And in 1957, here are the appearances by aliens in Batman stories:

None. Zip, zero, rien. In Detective #250, an alien rocket does make it to Earth, giving a crook some fantastic weapons, but the aliens themselves do not appear.

A big bulge in 1961, but pretty sharp declines after that, so it looks like Schiff was phasing out the aliens before Schwartz took over.

I am aware of at least two other Batman and the Aliens stories; in Batman #41 (June-July 1947), Batman battles a Martian villain, and in Batman #78 (Sept 1953), he encounters The Manhunter from Mars.

Incidentally, the alien craze of the late 1950s-early 1960s was not solely limited to Batman and Jack Schiff. While doing some research on the Archie series, I came across this cover: 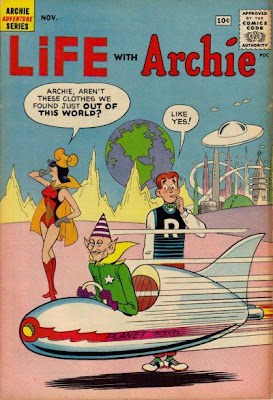