We continue our look at Batman and the aliens. In 1959, the World Series was played for the first time ever west of the Mississippi, with the LA Dodgers taking the crown. That same year, the Baltimore Colts won their second consecutive NFL title behind Johnny Unitas. The #1 tune that year was Mack the Knife by Bobby Darrin, and the top-rated TV show was Gunsmoke.

In Detective #263, Batman learns of an alien who crash-landed near a Mayan village some 100 months earlier: 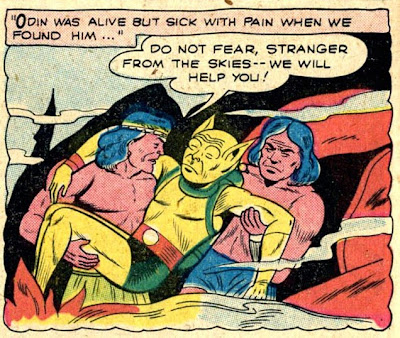 The alien gave the tribe a few terrific alien tools including an anti-gravity sled, but crooks have stolen it from the tribe. Batman pledges to bring the alien tools back to the Mayans, but I should note that the ending of the story leaves that up in the air.

Status: True alien, appeared in the past and later left Earth. Green and human-sized. The concept of aliens leaving technology behind that is abused by local crooks is a very standard plot, so I'll give it only one Klaatu out of five. 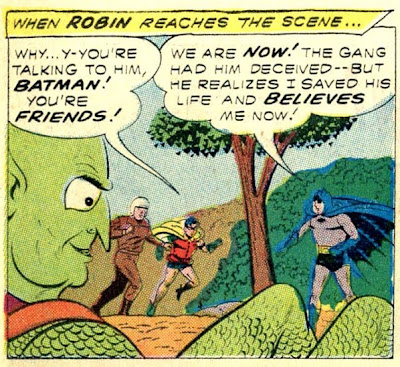 Status: True alien, green and giant-sized. Two Klaatus awarded for this one; it's nice to see an alien who's enormous, but it's also the usual "convinced by crooks that acting crooked is normal on Earth," plot.

In Batman #124, the Seeds from Space appear, but once again the "alien" in the story is a robot: 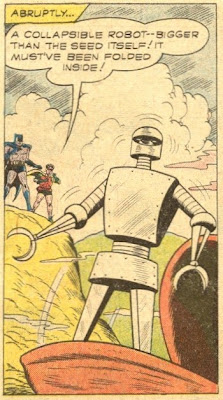 Status: Not an alien, an alien robot.

In Batman #125, Batman becomes the King of the Planet Plaxius: 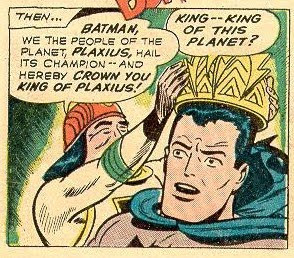 Status: Extraordinarily tricky. The planet is in another dimension, and the aliens do not appear alien; rather they just dress differently. Still, they do use space ships and so I'll call them true aliens, human-sized and caucasian in color. Four Klaatus for this unusual alien race.

In Batman #128; the dynamic duo get caught up in a dragnet for an interplanetary crook: 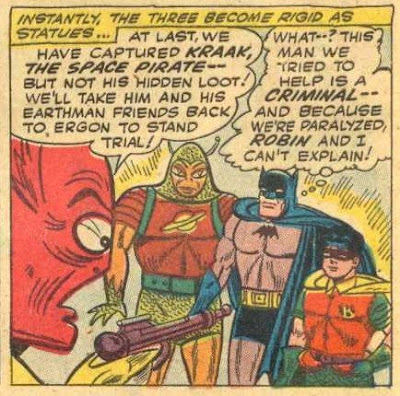 Status: True aliens; two different varieties; one orange-skinned and the other purple-red in color, with both human sized. Two Klaatus.

As you can see, the aliens were nowhere near as common in 1959 as they would become later: