The Great Price Increase of 1961

For most of their history, comic books had been priced at a dime. Oh, there were Nickel Comics, and the annuals were generally priced at a quarter, but these were definitely exceptions to the rule. Not that there hadn't been inflation anyway; that dime bought you a 68-page mag in 1940, a 60-pager in 1944, a 52-pager in 1950, and a 36-page issue by the time the Silver Age started.

Dell Comics made the first move effective with their February 1961 issues: 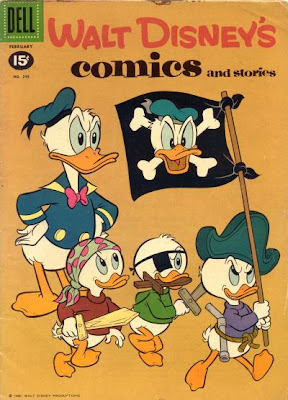 Although Dell persisted with the 15 cent price for over a year, it's not hard to see that they had troubles, especially as the rest of the industry held out until the end of 1961. First, they began advertising contests on their covers, and eventually, in mid-1962 they dropped their prices to the new standard of 12 cents.

As far as I can see, the other publishers mostly went to 12 cents around the December 1961 issues, but you could see that a change was coming. In the March 1961 issues, DC began putting a box around the price, noting "Still 10c". That was dropped in favor of just "10c" with the August issues, and then in December we finally saw the new price-tag of four-color entertainment: 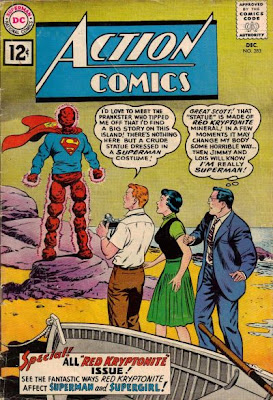 Archie, Marvel, and other publishers pretty much changed their prices at the same time. Not surprisingly, this resulted in a significant dip in sales. Of the 36 titles reporting sales in both 1961 and 1962, only seven reported increased sales in 1961, and three of those I'm a little suspicious of; the ACG titles Adventures into the Unknown and Forbidden Worlds apparently reported identical sales in both years while their Unknown Worlds book showed a 500-copies-per-issue increase.

What comics did the best? It looks like Archie comics were the most successful at retaining readers, with the flagship title only losing a couple hundred copies per issue and backup titles like Betty and Veronica, Jughead and Archie's Pals & Gals actually picking up a bit in sales. On the DC side, only Justice League of America increased sales, from 335,000 per issue to 340,000.

What really got hammered? Three DC titles dipped by over 20%; Mystery in Space, House of Mystery and My Greatest Adventure. The only DC war title I can find sales for those years, Star Spangled War Stories, dipped by about 4.9%.

Some of these numbers make sense if you think about them. Wonder Woman didn't decline all that badly; down 6.5% in this market was practically up, so the two female-oriented books that we have stats for, Wonder Woman and Lois Lane, both did better than average. Girls that bought those comics didn't find their budget as pinched as might their brothers because they only had two heroines to choose from. It's not surprising that the war stories didn't do as badly as some of the others; they were probably purchased by older readers on average. Sugar and Spike, the only comic on the list designed for very young readers, suffered a pretty steep drop of 18%. Ditto with the monster-oriented issues like House of Mystery and My Greatest Adventure; the kiddies who read them were more price conscious.

What about Marvel Comics? Well, Fantastic Four didn't report sales for 1961 and 1962, but we can see that their two monster titles got crushed. Tales to Astonish slipped by 25% while Tales of Suspense declined by over 31%. So there is certainly ample evidence that Stan Lee's incredible Marvel Silver Age was half inspiration, and half desperation. In 1963 both those titles featured superhero stories and gained back all the readers they had lost in 1962.

Note: Most titles would gain sales over the next few years, although frustratingly, the main publisher (DC) did not report sales for 1963 and 1964, making it hard to gauge the recovery apart from other effects.
Posted by Pat at 6:51 AM