Tracers: Batman and Superman in the JLA

Julius Schwartz tells a famous anecdote in Man of Two Worlds, his autobiography, about how in the early days of the Justice League of America, Mort Weisinger and Jack Schiff refused him permission to use Superman and Batman in their stories, and especially on the covers. They were reportedly worried about overexposure of their characters. As Schwartz tells it, he was getting congratulated by Jack Liebowitz on the success of the JLA when Liebowitz, DC's publisher, asked him why he didn't use Superman or Batman in his stories. When Schwartz explained, Liebowitz exploded with anger that Weisinger and Schiff didn't own the characters, DC did, and that he now had permission to incorporate them into the JLA stories, which Julie did with alacrity.

The first part of the story certainly fits; although Batman and Superman had cameos at the end of the JLA intro story in Brave & Bold #28, they were not featured on the cover, and indeed did not appear on a JLA cover until #10: 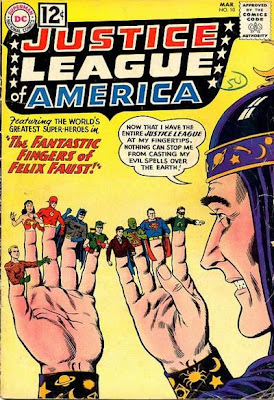 Okay, so here we go; JLA #10, Mr Liebowitz gives him the nod, and Schwartz responds with a cover featuring Batman and Superman, end of story, beginning of Dark Knight and Son of Krypton in JLA, right?

Uh, no. Superman and Batman next appeared on the cover of JLA #19, and there, they were used as bookends for the rest of the League: 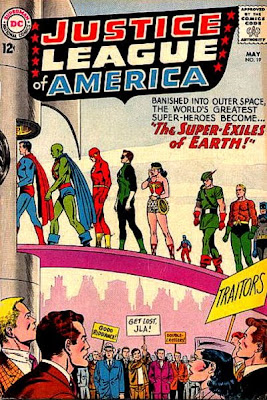 So it would appear that Schwartz got his permission from Liebowitz around the time that JLA #25 was being planned; prior to that Batman and Superman had appeared on only three covers; after that, they were generally featured prominently on virtually every cover, and of course around the same time (as JLA #27 was published) Schwartz took over the editorship of Batman and Detective Comics.
Posted by Pat at 6:39 AM