In 1961, Roger Maris clubbed 61 home runs, breaking Babe Ruth's longstanding record. The Green Bay Packers defeated the New York Giants for the NFL championship, starting a run of 7 years in which they would win five titles (including the first two Super Bowls). The hit song of the year was I Fall to Pieces by country crooner Patsy Cline. The top TV show was Wagon Train.

In Batman #137 (January 1961), Robin abandons Batman to join up with the new crimefighter in town, Mr. Marvel, who has an amazing collection of ray guns. It turns out that Mr M had blackmailed Robin into teaming with him by threatening to kill Batman. But Robin manages to defeat Mr. Marvel and when they unmask him: 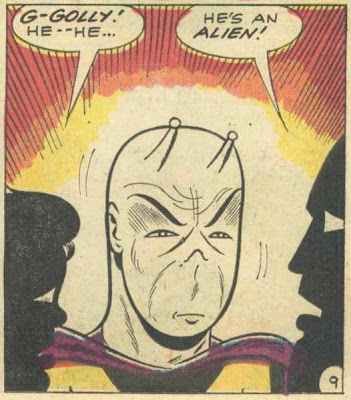 Status: True alien, white and human-sized. It's not really much of a surprise when he's unmasked, since his ray guns and other gadgets definitely seemed otherworldly. Two Klaatus out of five.

In that same issue, Batman and Robin encounter The Teacher from the Stars: 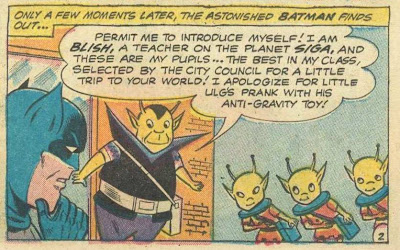 Status: True aliens, yellow and human-sized. It's very rare to see alien children, so we'll give this appearance four Klaatus.

In Batman #140, the most famous alien in the DC universe shows up: 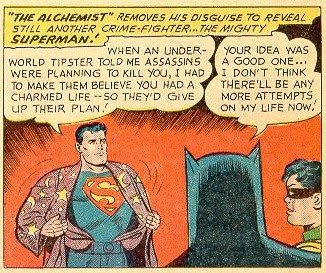 However, since this is not what people usually think of when they consider Batman and the Aliens, I'll ignore this appearance for now.

In that same issue, Batman and Robin are accidentally transported to another planet. While they wait for the aliens to send them back to Earth, they make a horrifying discovery: 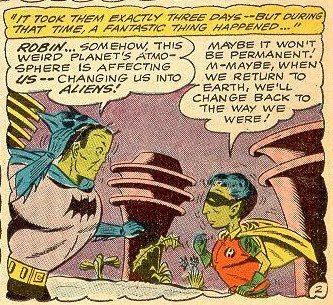 Status: True aliens, green and human-sized (the actual aliens look just like Batman and Robin in that panel). Fortunately the effect wears off a day or two after they return to Earth. Batman transformed into an alien? Five Klaatus, easily.

In Batman #142, an alien Batman had befriended sends him a protective robot: 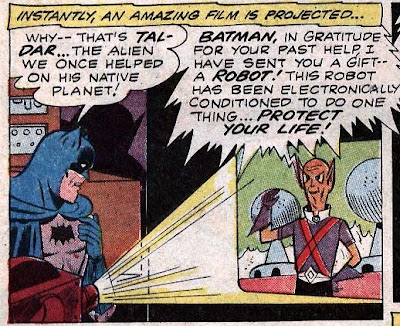 Of course, you can probably guess how that story played out; the robot was too protective and kept preventing Batman and Robin from going into action.

Status: True alien, orange and human-sized. Since he doesn't actually appear on Earth, we'll give him only one Klaatu. Taldar previously appeared in Detective #282 (August 1960), so we'll encounter him again.

In Batman #143, they encounter a strange creature:

Status: This one's tricky, because the creature never communicates with Batman and Robin directly. We know it's an alien creature, but in one panel Robin speculates that it was an alien animal, sent to Earth on a test rocket (as one of the early astronauts for the Russians was a dog, named Laika. Since unintelligent aliens are excluded from our count, he's not a true alien, but an alien beast.

In Batman #144, Batman and Robin find themselves in the middle of the alien feud on Earth as a pair of aliens duel for the hand of a woman: 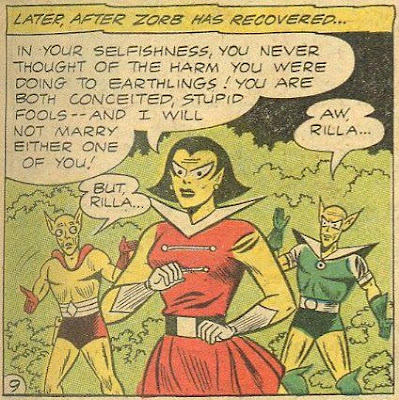 In Detective #287 (January 1961), Batman and Robin battle the Raven and the Wasp, two ordinary Earth crooks who have extraordinary weapons. It turns out that rival aliens are using the crooks as surrogates to obtain three pieces of a meteor that will give them fantastic powers Batman and Robin hypnotize them into going back to their home planets: 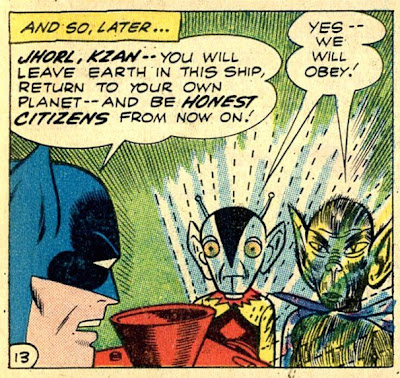 Status: True aliens, one white and the other yellow, both slightly smaller than humans. Two Klaatus.

In Detective #291, the Dynamic Duo face the Creature from the Bat-Cave: 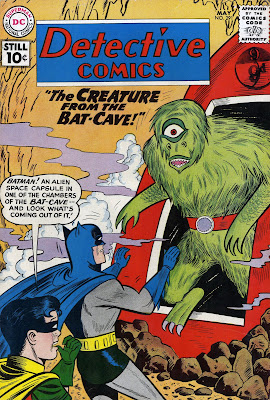 While it's from Jupiter, it's unintelligent, having been sent to Earth by its master to locate four small pyramids as part of a contest.

Status: Not an alien; an alien beast.

Detective #292 includes another Superman cameo, but otherwise no aliens.

Detective #293 Batman, Robin and other passengers on a ferry boat are transported to an alien planet: 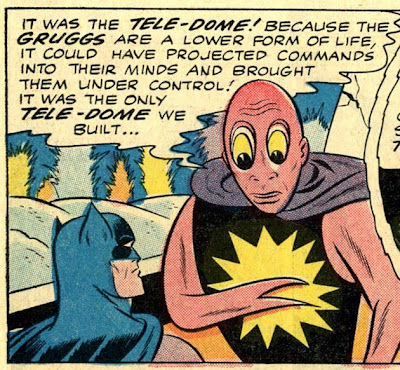 In Detective #295, Batman and Robin go back to the ancient Egypt, where they encounter: 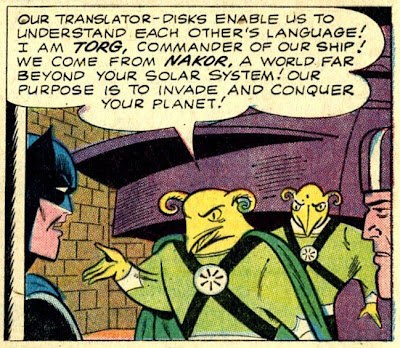 Status: True aliens, yellow and human-sized. Four Klaatus for aliens in the past.