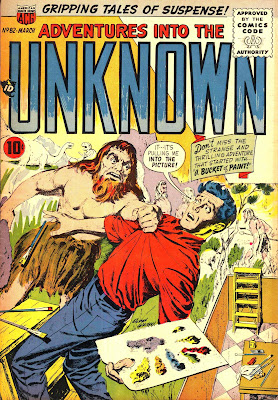 I have talked a bit about American Comics Group in the past. ACG was a small publisher, putting out about 1100 comics over from 1945-1967, or about 4 issues a month. Adventures into the Unknown was their longest running title, lasting 174 issues before finally folding with the rest of the ACG line during the height of Batmania. They had generally good artists, including Ogden Whitney, who did the cover shown above, and a terrific editor/chief writer, Richard Hughes.

AITU had started out life as the original horror comic book, featuring stories involving vampires and werewolves and the like, although the stories were much tamer than the famed EC Comics line that followed it. After the advent of the Comics Code Authority, Hughes refocused the series on more light science fiction plots, without going into the excesses of the "monsters and aliens" that were common at DC and Atlas (the 1950s Marvel). Hughes excelled at the O'Henry twist at the end, and the story that leads off the issue demonstrates his superb plotting abilities.

A Bucket of Paint features Edward Finch, a meek, unassuming clerk for a Wall Street firm. In his daydreams, he's a sports star, a financial tycoon, a pirate sailing the high seas, but in reality, he's henpecked by his wife and bullied by his boss. But he consoles himself that if ever he got a big break, he'd know what to do with it.

Assigned to repaint the house, Finch notices a new paint store, and picks up the supplies he needs. The manager of the store gives him a free bucket, which he advises Edward to use on his cellar.

The first afternoon, as Edward paints the cellar wall, he's startled to see a scene coming to life: 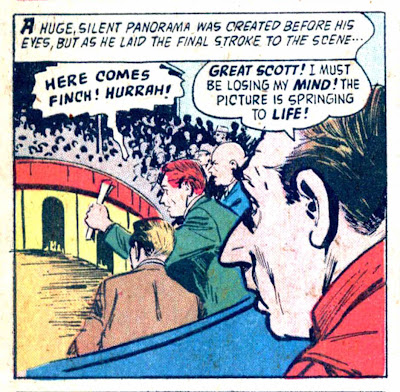 Suddenly he finds himself in the scene, at the Olympics, competing for the United States. He wins the Pentathlon, setting records in every event as he does so. Then he spots the store manager who gave him the free bucket of paint, who tells him: 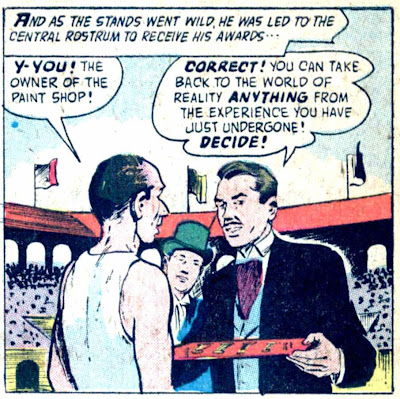 He decides to take the medals, as that way he'll have proof that he won all those events. But when he gets back to the normal world, he realizes that his wife will think him crazy if he starts showing off his Olympic medals.

He tries stopping by the paint store, but it's closed for the weekend. That night, he decides to paint another wall with the free bucket. This time it reveals the Wall Street office of a business tycoon. Finch makes brilliant moves and this time when the paint store manager shows up, he takes the money back to the real world with him. He blows off his boss and opens up his own investment firm, but his ability is not as high as his daydreams: 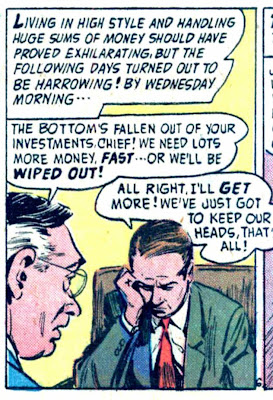 He stops by the paint store again, only to find that it's closed for a vacation. He has only enough paint left in the bucket to do one last wall. This time he's a pirate on the high seas. He wins a lot of treasure and when the store manager shows up again, he takes the gold and jewels back with him.

But once again, his investments don't pay off and within a week he's ruined. He goes back to the store and is relieved to see it's open. But the store owner has bad news for him. This was Edward's second chance at being a success, but he'd blown it every step of the way. Instead of taking the health and vitality of a top athlete, he'd taken the worthless medals. And: 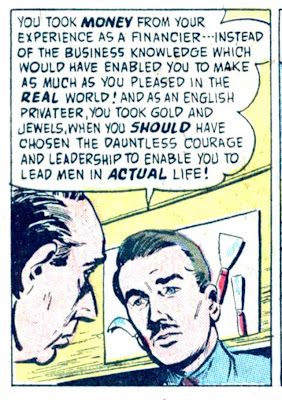 Finch begs for another chance, but he's already had that; he will have to go back to his old boss and plead for his job back.

Comments: Terrific story; it's kind of a mixture of the classic "three wishes" plot and Damn Yankees. The art is rather humdrum, but it suits the mood of the piece.

The second story is entitled Strangest Job In the World, and it's of interest chiefly because it was the subject of an obvious swipe by DC a few years later. In House of Secrets #23, DC introduced Mark Merlin. Compare and contrast: 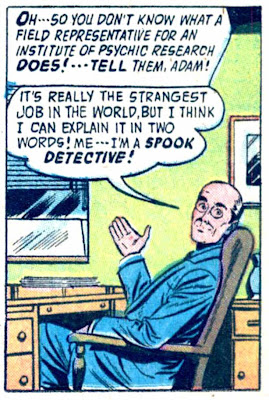 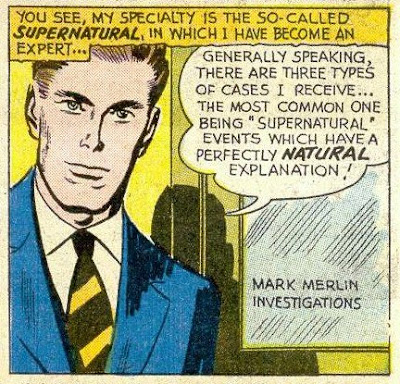 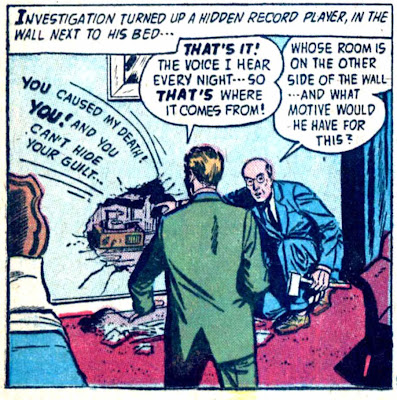 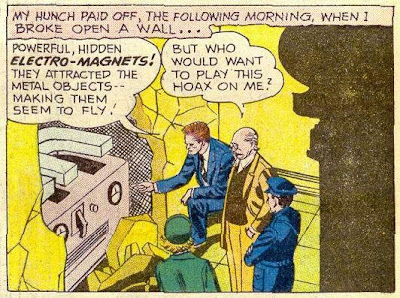 In each case the story closes with a bit about a supernatural event that may have been real. So it seems obvious that either both stories were written by the same person, or the Mark Merlin story (which is currently uncredited at the GCD) was a swipe of this Adventures into the Unknown tale, which predates it by two years.

Update: Commenter Jonathan Miller notes the possibility that both stories were inspired by a third, earlier story and points to the interesting Carnacki stories from around 1910. I read one and while the idea of a supernatural detective does seem to originate with Carnacki, I would note that Carnacki is significantly different from Mark Merlin or the psychic detective in this story; he's very much part of the mystical world, drawing pentagrams and the like to protect himself from evil spirits. Still, he may have inspired a similar detective character who in turn inspired the two comic supernatural detectives.

The third story is also interesting. Bob Morrison had strange abilities to foretell the future; he predicted World War II while in high school. He graduated and enlisted shortly after Pearl Harbor, and because of his precognition he correctly predicted the date for D-Day, and that the German offensive known as the Battle of the Bulge would be a disaster for the Allies. He meets a nurse named Alice whom he strangely refers to as Miriam. But it turns out that he's got another life far in the future as the President of the United States and that's his wife then. When he's wounded in battle, he realizes that he's not going to make it, but not to worry; that they will meet again in the future.
Posted by Pat at 6:29 AM