1. True or false: Ray Palmer is a professor at Ivy University.

False: Ray is a grad student and research scientist at Ivy U.

2. What retired professor at Ivy invented the Time Pool, by which the Atom travels into the past?

As first revealed in the Atom #3, Alpheus V. Hyatt invented the Time Pool.

3. At what high school did Ray Palmer deliver the commencement address? 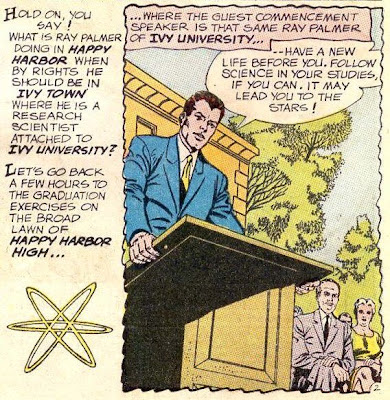 
4. Ivy Town had more than its share of criminals. Of the following, who was not a crook:

A. Bates, the caretaker.
B. Clinton, the watchmaker.
C. Phillips, the newspaper reporter.
D. Dudley, the horticultural expert.
E. Elkins, the photographer.

Dudley, the horticultural expert, was another retired professor at Ivy University and not a criminal.

5. What did Jean Loring's father do for a living?

Jean Loring's father was a professor and scientist with no specific details as to the field he was involved in when he was introduced in Showcase #36. Later, in the Atom #21, we learned that he was researching using gravity as an energy source for spaceships, so it appears that his specialty was physics.

Jim kicked major league butt on this question, getting all five correct and even adding some details on the inspiration for Alpheus V. Hyatt. Great job!
Posted by Pat at 3:42 AM