We pick up again with Iron Man #4. Tony helps the Freak become Happy again, and Hogan and Pepper again depart the scene. Meanwhile, behind the Iron Curtain, Soviet scientists are working on making the Unicorn (last seen in an IM story way back in Tales of Suspense #56) stronger and more powerful, although they acknowledge that the treatments they are giving him will shorten his lifespan. But as usual, there's no honor among commies: 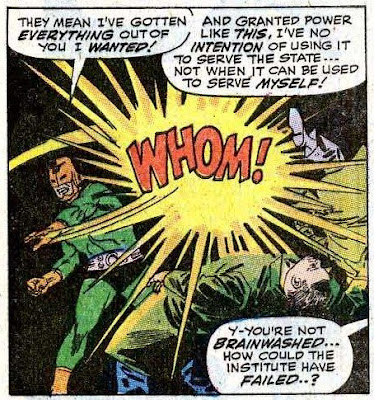 The Unicorn decides to attack a meeting of scientists from all over the world, in the hopes that they will be able to save him from the shortened lifespan that his treatments have guaranteed. Meanwhile, Tony's been noodling and wonders if he should reveal the secret of Iron Man: 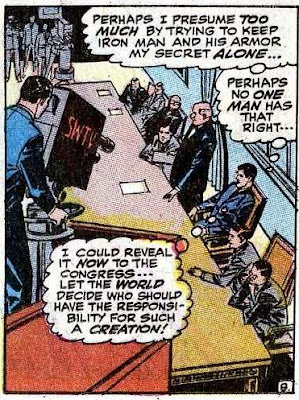 But before he can act on that idea, the Unicorn bursts in. Tony finds himself separated from his armor-carrying attache case, and each time he tries to recover it, the Unicorn blasts him. But the third effort succeeds and shortly Iron Man and the Unicorn are battling it out on the snow-slopes outside the convention hotel. The Unicorn uses his heat ray to try to melt Iron Man's armor, but now the thermal coupling that Tony put into the suit does its job, recharging him. He is able to destroy the Unicorn's power belt, and tosses it off a cliff. The commie rat dives off the cliff after it and vanishes into a lake below. And Tony realizes that he's got to maintain his Iron Man identity, no matter what the personal cost.

In IM #5, Tony finds himself transported into the future, where the humans want to kill him. It seems he created a computer called Cerebrus, which gradually grew and grew in power and responsibility, until eventually it decided to take over. Now the humans are forced underground, rebelling against their silicon overlord. They have decided that by eliminating Tony, they will prevent Cerebrus from ever being built.

But before they can carry out his execution, Cerebrus attacks. Tony gets away, aided by this gal: 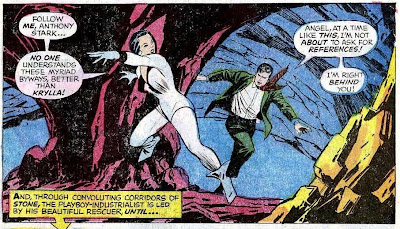 Krylla leads him to an old museum, where one of his suits of armor is on display. Tony dons the costume and starts his quest towards the master computer complex, the source of Cerebrus' power. He battles a few robots along the way, and eventually faces a manifestation of the computer itself: 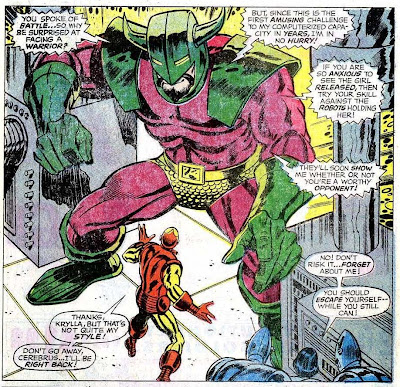 It looks like Cerebrus is too powerful for Iron Man, but Tony has a brilliant idea: 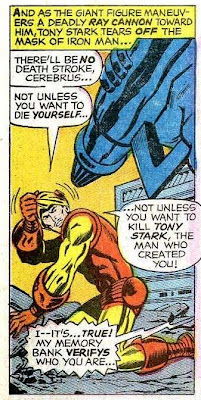 This causes Cerebrus to hesitate just long enough to allow Krylla to throw a blast pellet into the master computer complex, destroying him. And there's a tender moment as she sends Tony back into the past: 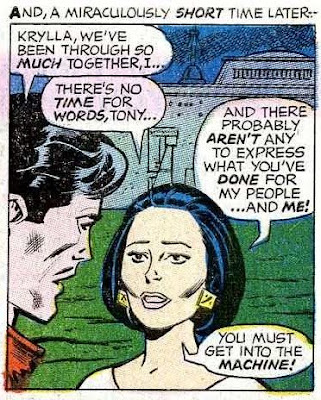 And as the story closes, Tony muses, "... [N]o matter what challendges I meet in this age, a part of me will always be in the future... with her!"

Nice sentiments, but by the next issue Krylla's apparently forgotten, as Tony's wooing another gal: 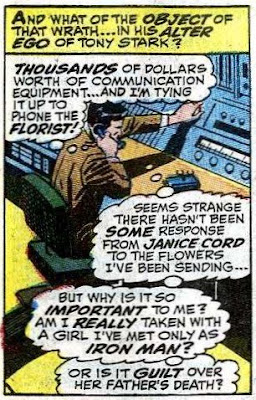 We learn that the reason Janice Cord is not replying to the flood of flowers is because she's still conflicted over Tony being indirectly responsible for her father's death. This was a frequent plot point used by Marvel in the 1960s and 1970s; Betty Brant blamed Spiderman for her brother's death, just as Gwen Stacy and Harry Osborne blamed him for the deaths of their fathers, and Professor Warren and Ned Leeds would blame him for the death of Gwen.

Meanwhile, the Crusher, whom Iron Man had made so heavy in Tales of Suspense #91 that he sank down into the Earth, has managed to return to the surface. He is consumed with the desire to avenge himself on Shellhead. At the time I reviewed TOS #91, I speculated that he would next turn up in a Mole Man story, but as it happens he fell into the cavern of Moley's worst enemy, Tyrannus (who had amnesia and was not around at the time). The strength of the potion he'd been given eventually wore off, as did the excess weight. He was able to formulate a new potion that would not be susceptible to Tony's centrifugal force ray, and then clawed his way to the outer world again.

Whitney Frost, the leader of the Maggia, has been pursuing her seduction of Jasper Sitwell. Arriving at Stark Industries shortly after the Crusher attacks, she discovers the factory being abandoned, and takes the opportunity to try to steal one of Tony's weapons. She gets caught in the middle of the battle and the Crusher seizes the opportunity to use her as a hostage: 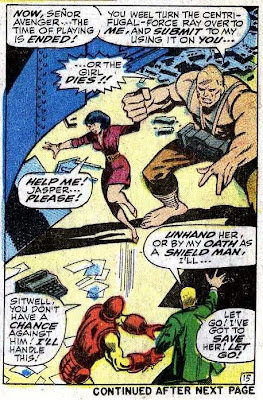 Iron Man has to kayo Sitwell to prevent him from committing suicide by Crusher. Then he agrees to turn over the centrifugal force ray and submit to being bathed in it. But: 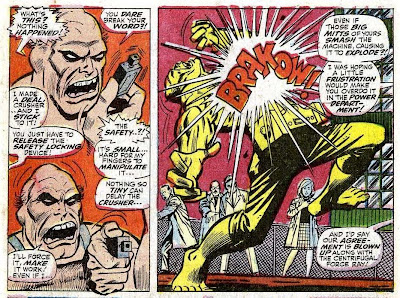 Iron Man then lifts the Crusher into the air, but he breaks free and falls into the waters off Long Island, apparently to drown (just like the Unicorn in IM #4). As the story closes, Sitwell is furious with Iron Man.

Comments: A solid series of stories, marred only by the flighty emotions of Tony Stark from IM #5 to IM #6. The situation with Whitney Frost looks to be building to a climax. George Tuska took over on pencils with #5, although Johnny Craig remained the inker.
Posted by Pat at 9:51 AM