Where In the World is Midway City

This came up in a chatroom I was in the other day, and I thought it made an interesting and oddball topic. In the first Hawkman Silver Age tryout, we learned that they had followed a Thanagarian thief to Midway City, on Earth.

Now of course, the logical conclusion is that Chicago is Midway City; one of Chicago's major airports is Chicago-Midway. One assumes that Midway refers to halfway between New York and the West Coast. Which means it's a lie; in fact it's only about a third of the way.

Update: Looking at Wikipedia, it turns out that Midway was originally Chicago Municipal Airport, but was renamed Midway in honor of one of the key naval battles of World War II against the Japanese,

But... as you probably guessed, locating Hawkman's Midway City does not turn out to be that easy. The DC Wikia gives the location of Midway City as east of Sault Ste. Marie (Canada) on the Upper Peninsula of Michigan.

Which is something of a joke. Here's a map of the area; Sault (pronounced Sue) Ste. Marie, Michigan is a town of 16,000 people, and while the Canadian Sault Ste. Marie has a population of 74,000, that's still way too small an area to be credible as Hawkman's home base. For example, the man they confide in, George Emmett, is described as Midway City's police commissioner; but in a small town like Sault Ste. Marie, they would just have a police chief.

And in the very first cover for Hawkman, we are shown the "Bi-State Tunnel": 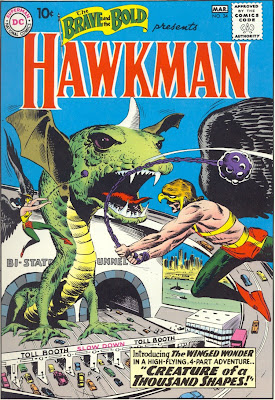 A four-lane tunnel in each direction? Even the Holland and Lincoln Tunnels aren't that big. So you're going to tell me that East Nowhere and West Nowhere have a bigger tunnel between them? It's simply not credible. And look at that skyline in the distance; that's clearly not some small burg; it's a major metropolis.

Not to mention the obvious problem with the name "Bi-State Tunnel"; there's no other state in 100 miles of Sault Ste. Marie, Michigan; Canada calls them provinces. It would be the "International-Tunnel" or the "Bi-National Tunnel". On the other hand, Chicago is very close to the border between Illinois and Indiana, and while there's no tunnel between them near that border, the rest of the setting clearly fits; we're seeing the Indiana side, Lake Michigan and Chicago to the right.

Still, we must look for further clues. From Brave & Bold #43 (the fifth tryout issue), we get some definite geographical markers: 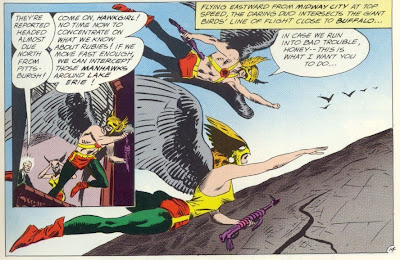 Okay, so Buffalo is roughly due east. Here's a map: 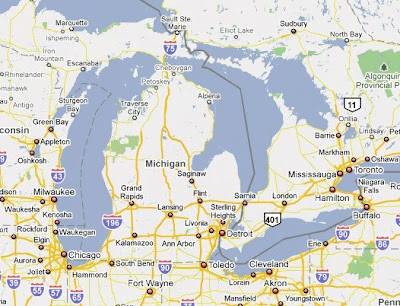 There are a number of cities that are west of Buffalo but still in the United States. Detroit, Chicago and Milwaukee strike me as the most likely candidates; as you can see, Buffalo is southeast of Sault Ste. Marie, far enough south that the idea of it being described as east is a bit ridiculous.

Here's another tantalizing clue from Mystery In Space #90's Planets In Peril: 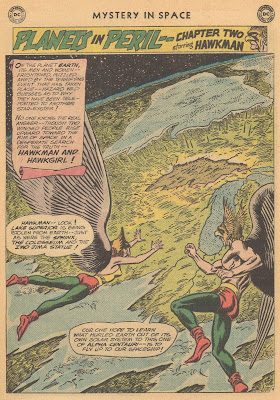 They are on their way up out of the atmosphere, and where are they? Looks to me like somewhere south of Lake Michigan, and nowhere near Sault Ste. Marie (which is near the far eastern corner of the disappeared Lake Superior). They are reasonably close to Chicago; certainly closer to there than SSM.

So on the whole I would say for now that Midway City is Chicago. Now I will have to revisit this post in a week or so, because Midway City is not solely the home of Hawkman and Hawkgirl; it's also the base of the Doom Patrol, and evidence from their stories must be taken into account as well.