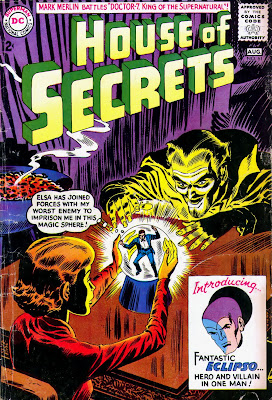 House of Secrets had long been the home base of Mark Merlin, an investigator of the supernatural; in fact the letters column was simply called Mark Merlin's Mailbox. The backup stories were the usual mixture of monsters and science fiction.

At the end of 1961, DC increased its cover prices from 10 cents to 12 cents. The result was pretty painful. House of Secrets lost 20% of its circulation. With the DC superhero books showing less dramatic declines, it's not surprising that the company started looking at putting superheroes in some of their other titles. My Greatest Adventure picked up the Doom Patrol in June 1963; House of Secrets added Eclipso with this issue (July-August 1963).

The timing was pretty good; much of North America experienced an eclipse of the sun on July 20, 1963, with parts of Maine and Canada having a total eclipse.

The Mark Merlin story leads off the issue. It picks up with the story from the last issue, where Merlin had been transformed into a cat: 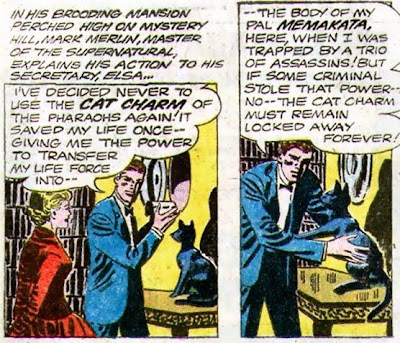 As he and Elsa chat, a repairman indicates he's fixed the light in Merlin's bedroom. Later that night, someone steals the jawbone of a dinosaur; Merlin remembers while reading about the story in the papers the next day that the jawbone is an ingredient in a magical formula. The next night we see Merlin himself under the control of some mysterious voice:

The next day, Elsa and Mark learn that he is the one responsible for the recent crimes. Since somebody seems to be using him for their dirty work, Merlin decides to transfer himself into the cat, and follow his body when it goes out that night. Sure enough, it leads him to the castle of Dr 7, his new enemy.

When Merlin transforms back from the cat, he regains control of his body and the two sorcerers have something of a battle: 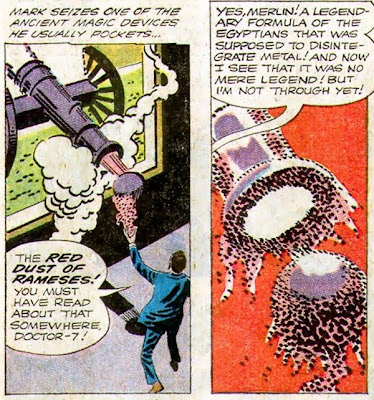 But Merlin's assistant gets taken over by Dr 7, and helps to trap her boss. Fortunately, Mark can still transfer to the cat, which reverses the spell:

Comments: Not a bad story, especially given the continuity from the prior issue. Merlin appears to be something of a Dr Strange-type without the cape; of course Merlin predates the Marvel character by several years.

The second feature is the Eclipso story. Dr Bruce Gordon is about to celebrate his greatest triumph: the dedication of an entire city run on solar power. But as he makes the last minute adjustments, an eclipse far away causes bizarre changes:

His evil self unleashed, Bruce changes into a bizarre costume and reveals knowledge that Gordon himself did not know. He devastates the Solar City: 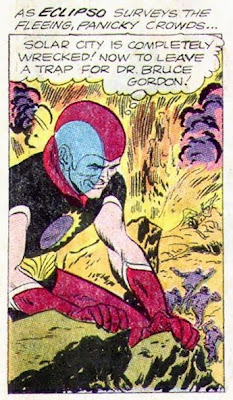 His mentor (and father of his girlfriend), Professor Bennett discovers that Eclipso is secretly Bruce Gordon, when he changes back into his normal self. When they try to figure out where Eclipso came from, Bruce tells a rather silly story about some volcano god from South America who tried to kill him and failed, but cut him with a black diamond. No, I am not kidding: 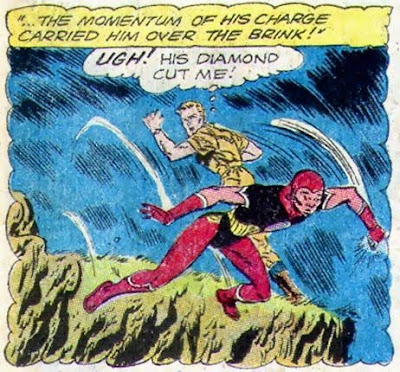 So now Bruce and Professor Bennett have to find some way to prevent him from wreaking havoc again. They get the smart idea of locking him in a wind tunnel from which he can't escape during the next eclipse, but: 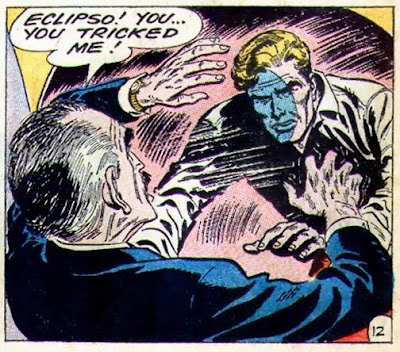 Fortunately Bruce has planned ahead to prevent Eclipso from making good on his escape: 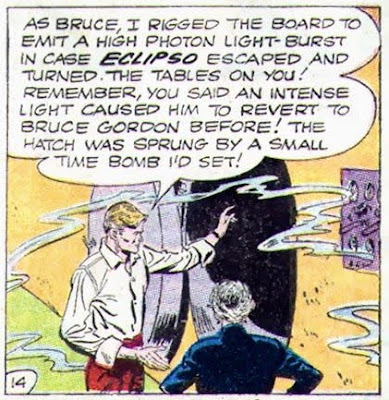 Comments: Obviously a swipe of the Incredible Hulk/Bruce Banner bit, although making the alter-ego a villain rather than a misunderstood brute is a pretty interesting twist. Plus it's drawn by Lee Elias, a long-time favorite of mine. Eclipso was not destined for glory, but the origin story mostly works.
Posted by Pat at 8:51 AM

Email ThisBlogThis!Share to TwitterShare to FacebookShare to Pinterest
Labels: Eclipso, House of Secrets, Mark Merlin
Newer Post Older Post Home
Contact me: pcurley49+6 at gmail dot com (do the arithmetic to get a usable email addy).