We pick up with Iron Man #12, where we finally learn Vincent Sandhurst's secret. He had clashed with his brother, an inventive genius, and a resulting accident had effectively made Boris Sandhurst an invalid. Wracked with guilt, Vincent had embezzled significant sums from Janice Cord and her father, in order to help his brother with his experiments. Boris has discovered a way to harness the power of other people to overcome his body's limitations, and is now prepared to break loose.

Meanwhile, Iron Man has quickly gotten control of his Tony Stark robot and convinces the ambulance drivers that he doesn't need to go to the hospital. He decides to retire the robot forever as too risky. He's still planning on buying out Janice Cord's factories, although he senses that Sandhurst is just a little too eager.

However, Vincent has disappeared and Janice and Tony visit his hometown. There, they learn that everybody has been taken control of via a metal disk on their foreheads. The Controller (Boris Sandhurst) attacks and takes control of Janice. Iron Man fights back, but eventually he too is controlled by the metal disk: 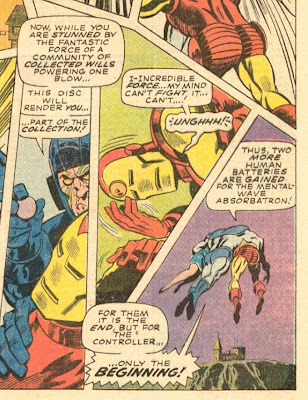 In the next issue, the Controller decides to take Manhattan. He commandeers a train, and loads the Absorbatron (by which he harnesses the power of other people) onto it. Will he get to NYC and gain the power of millions?

There is a long battle between Iron Man and the Controller, but in the end, the Big Apple is in sight. Fortunately, during the battle Jasper Sitwell did what was needed: 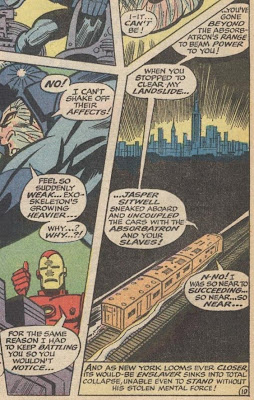 But afterwards Tony is conflicted about Janice. Can he continue to romance her, knowing that at some point he might have to make a tough decision to save her or to save a city like New York?

He goes off to the Caribbean, to investigate an attack on one of his plants there. He discovers an opponent to his employing the locals, a wheelchair-bound man named Travis Hoyt: 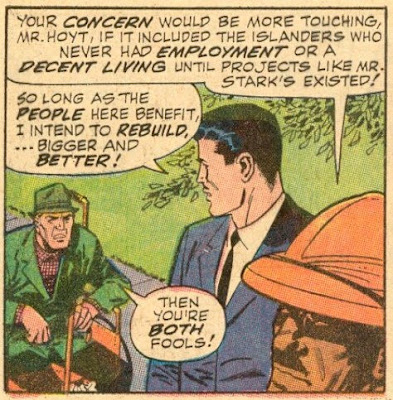 It turns out that Janice is staying with Hoyt. But Hoyt has discovered a fountain of youth-type pool that has restored his ability to walk, and given him great powers, even if it has scarred him horribly. 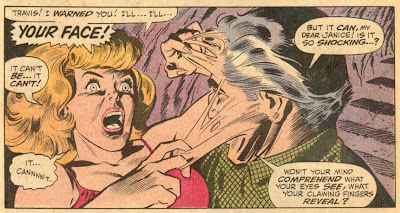 Hoyt is angry because the pool is drying up due to development on the island. He intends to bathe Janice in the waters, so she will be like him. But Iron Man comes along in time to save the day and Hoyt dies as the pool is sucked into the ground.
In Iron Man #15, we learn that the Unicorn had indeed survived diving off the cliff back in IM #4, and that he has been nursed back to health by the Fantastic Four's old enemy, the Red Ghost. Typical Marvel villain team-up; both of them spend the time insulting each other: 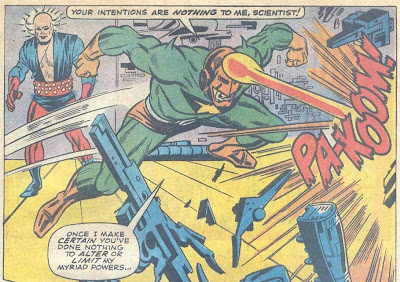 But as the Red Ghost has a formula that will help to keep the Unicorn alive, they reach an uneasy truce. The Ghost wants him to steal another one of Tony's inventions, which will bring about the battle the Unicorn desires with Iron Man.
Meanwhile, Janice Cord has decided after consulting with Tony to reopen her father's plants. They will be in friendly competition with each other. Archie Goodwin (the writer) makes sure to introduce the newest plot development at this point: 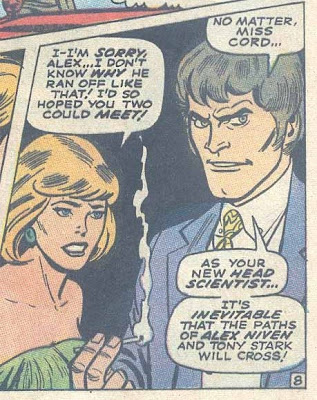 It's not hard to guess that Niven will turn out to be a bad apple.

The next day, as Stark and Sitwell are jetting to a test site with Tony's newest invention, the Unicorn strikes. Sitwell pushes Stark out of the plane, but before Iron Man can save the SHIELD agent, the plane crashes. Iron Man battles the Unicorn, but in the meantime, the Red Ghost has used the new invention to give him enhanced powers. Oh, and he was lying about the injections saving the Unicorn's life: 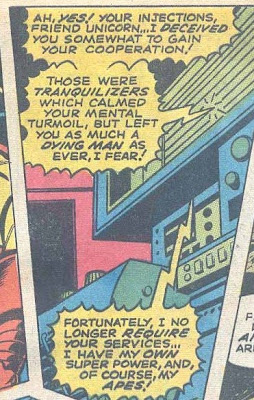 The Red Ghost blows up his own laboratory, trapping Iron Man and the Unicorn inside. As it happens, neither is able to escape on his own, so they have to combine forces: 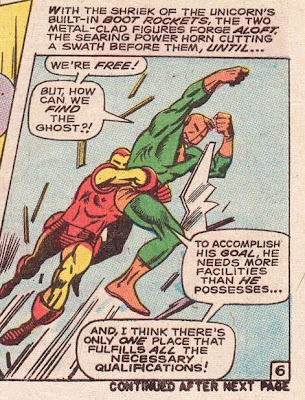 The Red Ghost has attacked one of SHIELD's laboratories in the African jungle, using his pet apes (who have also gained new powers. Somehow Iron Man and the Unicorn track him down, but the Unicorn behaves in typical Marvel villain fashion, failing to plan. As it happens the apes make fairly easy work of the new allies, and it looks like the Red Ghost will surely succeed. But one of his apes has gained intelligence and rebels. The Unicorn grabs the Ghost and escapes, vowing to make the Soviet scientist find a real cure for his death curse.

Comments: A so-so run of stories; I liked the two Controller issues, but was bored by the last three issues. Archie Goodwin seems to be having a tough time figuring out what to do about Janice Cord; she's obviously well-suited as a mate for Tony and yet he keeps thinking about the risk that she's in with him. And virtually every storyline starts out with an attack on one of Stark's factories and/or one of his new inventions. Indeed, that's one of the reasons I liked the Controller issues, because Stark had almost nothing to do with the plot.
Posted by Pat at 5:13 AM

Email ThisBlogThis!Share to TwitterShare to FacebookShare to Pinterest
Labels: Iron Man, Janice Cord, the Controller, the Red Ghost, the Unicorn, Tony Stark
Newer Post Older Post Home
Contact me: pcurley49+6 at gmail dot com (do the arithmetic to get a usable email addy).