Continuing our backwards trek through the Schiff era, we come to 1960. The Pittsburgh Pirates stunned the baseball world by defeating the Yankees in Game 7 of the World Series, behind Bill Mazeroski's walk-off home run in the bottom of the ninth inning. The Green Bay Packers lost their only championship of the Vince Lombardi era to the Philadelphia Eagles and Norm Van Brocklin. Cathy's Clown by the Everly Brothers was the #1 pop music hit, while Gunsmoke was the top-rated TV show.

In Batman #130, Batman and Robin faced The Hand From Nowhere, which was controlled by two apparent aliens: 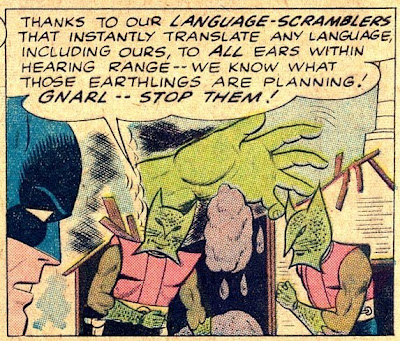 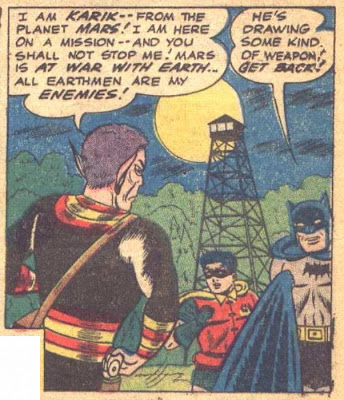 Status: Another fake alien; Karik was actually an actor playing a part who suffered the dreaded "blow to the head" that made him think he was really from Mars.

In Batman #136, Batman and Robin repel an Vordian invasion force: 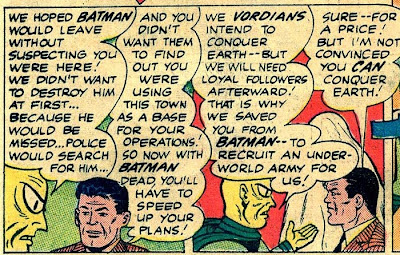 Status: True aliens, human sized and yellow in color. Two Klaatus out of a possible five.

In Detective #277, an alien ship crash-lands on Earth: 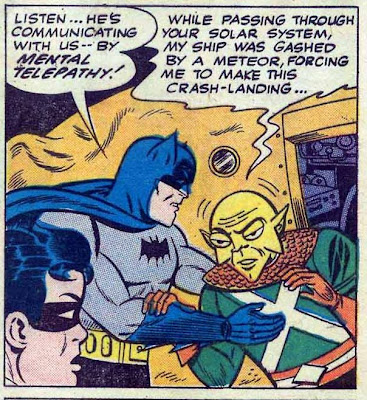 Status: A very tough call. The robot-looking thing is a robot and the orange and pink creature is a beast, with only rudimentary intelligence. In addition, they are from another dimension, which also makes things trickier as I've not included Bat-Mite, for example, as an alien in my schema. I'm going to rule against the true alien nature here as even a robot has no real intelligence. 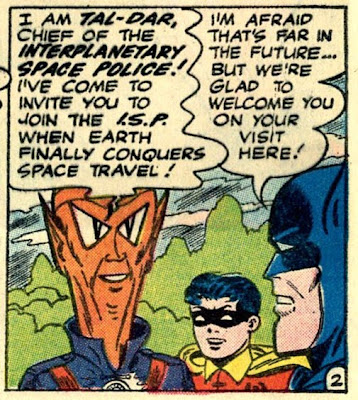 Status: True alien, orange and human-sized. As the only alien who appeared in two separate Batman stories (other than Superman of course), Tal-Dar, who later popped up in Batman #142 gets the full five Klaatus.

We also meet another alien race in the story: 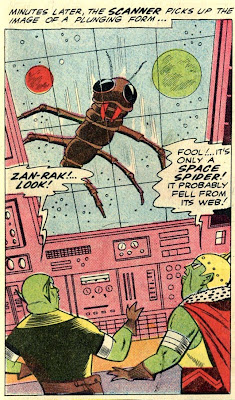 In Detective #283, a crooked scientist summons an alien to Earth with a machine: 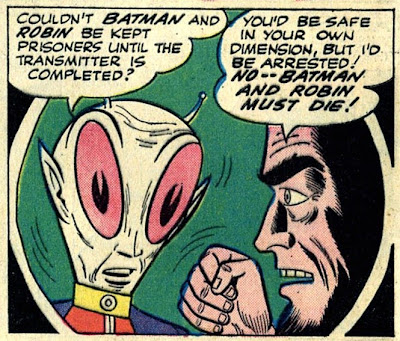 Status: True alien, white and human-sized. Three Klaatus for DC daring to reuse the Martian Manhunter's origin in a Batman story in Detective.

It certainly looks like 1960 was another banner year for aliens in the Batman canon. Summary for 1960:

I try to mention when I remember it, that these types of posts are very much inspired by H at the Comic Treadmill, whose terrific prop stars series are highly recommended.
Posted by Pat at 5:21 AM