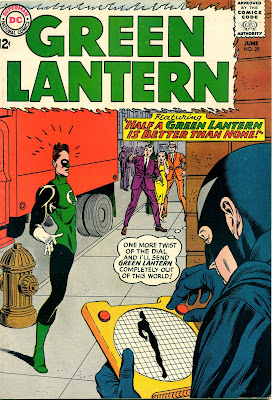 With this character currently featured in the DC universe, I thought I'd go back to his first appearance in the Silver Age, in Green Lantern #29 (June 1964). As the story begins, Green Lantern defeats some crooks. But after the fight, someone comes along and apparently collects leftover radiation from the scene. In a "breaking the fourth wall" moment, Gil Kane himself talks to us: 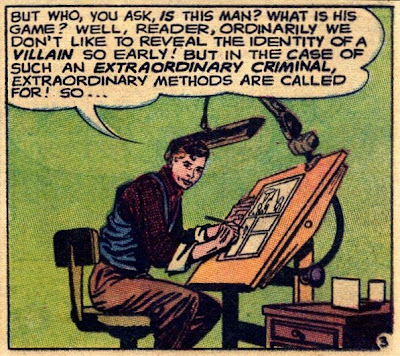 I confess that I generally don't like these popping out of the story moments, and this is no exception. It's not hard for me to guess that this is a John Broome story; he did this a fair amount. But in the next sequence, Broome breaks even more rules as he has the crook himself explain things to us: 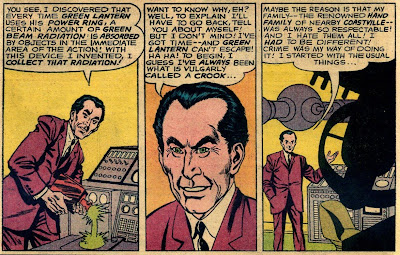 I can see why he did it; it would take pages to "show" rather than having him tell us in three panels. But you can also see the negative; how are we to understand our presence within the story, and the fact that a character is interacting with us? This is unusual in comics to say the least and somewhat off-putting. However, it does allow Broome to shoehorn in a very complex plot and an unusual character.

Black Hand explains that he is a very methodical man; he has kept track of everything he's learned in a notebook that he has committed to memory, so that if a situation arises, he's prepared for it, as here: 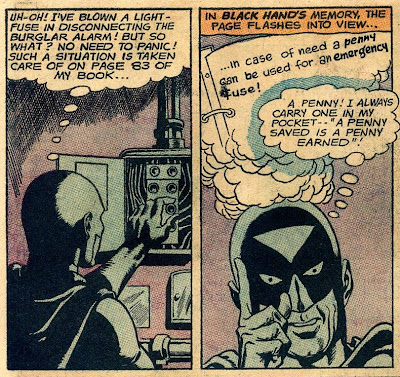 Personally, I found that very cool as a young man; indeed that scene of him realizing that he can use a penny for a fuse stuck with me from the first reading. Of course, nowadays we have circuit breakers rather than fuses, so the knowledge is pretty useless.

Broome (and his editor Julius Schwartz) were pushing the envelope here. The Comics Code Authority, under Part A (General Standards) noted:

2. No comics shall explicitly present the unique details and methods of a crime.

5. Criminals shall not be presented so as to be rendered glamorous or to occupy a position which creates the desire for emulation.

As you can see, Black Hand is also a big fan of what Broome refers to as "cliches" but which are really aphorisms. Knowing that he will eventually have to face Green Lantern, Black Hand has been absorbing energy from the Power Ring that he intends to use against the Emerald Gladiator.

As show on the cover, he uses the energy to try to blast Green Lantern to another dimension, but he only succeeds in banishing half of GL (fortunately the half that has the Power Ring remains). By so doing, he has half of GL's power, but he needs to get just a little more to get rid of GL forever.

Meanwhile, in nearby Coastville, his brothers are being honored for their achievements, but Black Hand shows up to spoil the party: 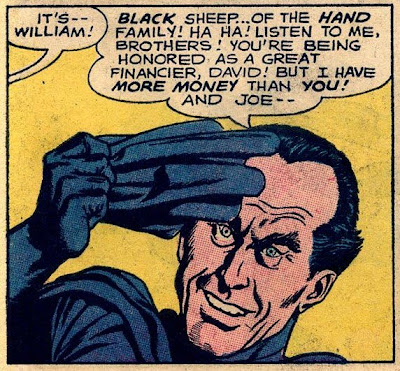 Fortunately GL shows up before Black Hand can rob everybody. And his body is whole again, even though Black Hand discovers that he still has half of Green Lantern's power. He puts BH down for the count, then reveals that his other half was just a mirror image, created to trick the crook. And much like the Joker, Black Hand has a Scrooge-style reaction to his beloved aphorisms being used against him: 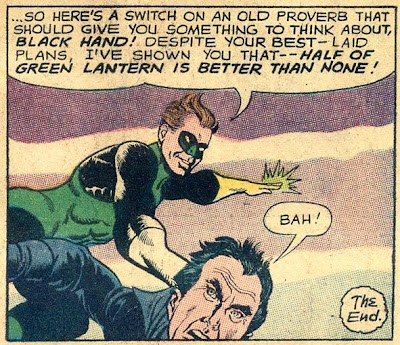 Comments: Black Hand is definitely an above-average villain for the Silver Age. In a way he seems a throwback to the Batman villains of the Golden Age, who always seemed interested in self-improvement.

El Mano Negro returned in Green Lantern #39 for his only other Silver Age appearance. This time his costume was changed slightly, now he had a complete down arrow on his forehead instead of the upside-down triangle: 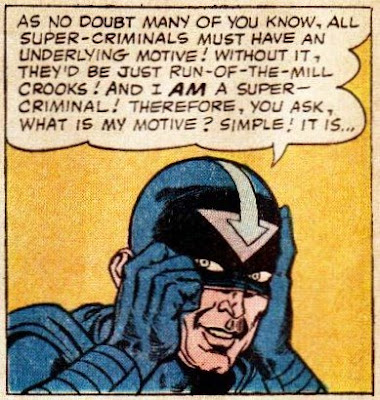 But obviously he has not lost his penchant for monologuing with Green Lantern's readers. Black Hand explains that he has committed perfect crimes, having stolen two of the most famous art objects in the world, a painting (probably the Mona Lisa, although DC with typical coyness calls it the "Donya Maria") and a sculpture.

Hal Jordan is surprised to find that he alone cannot see the art objects (although this turns out not to make sense given the rest of the story). So he realizes it must be his old enemy, the recent escapee Black Hand, who has stolen the treasures. But as he tries to track BH down, the latter has managed to hypnotize everybody into believing GL is actually the Black Hand, including Hal himself: 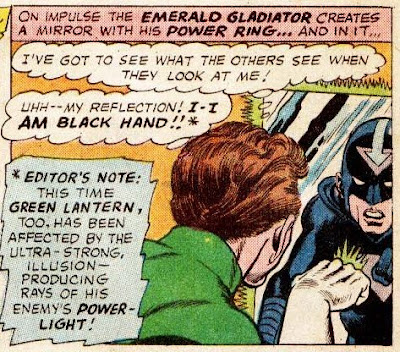 Okay, so why did Hal not see the Donya Maria and the sculpture in their places at the museum?

In the climactic battle, both are reduced to using their fists. Black Hand gets in the first punch but GL delivers the haymaker: 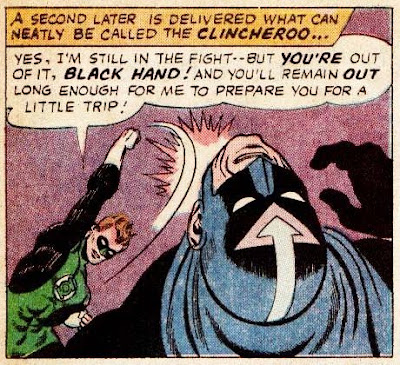 Comments: Cute story, but it loses a lot of the interesting aspects of Black Hand from the first tale, like the resentment he feels towards his family, and the notebook he has with every possible situation mapped out. IIRC, this was the last appearance of Black Hand in the Silver Age, although he did pop up once in a Green Lantern/Green Arrow adventure around 1971.

Scipio at the Absorbascon has a series of posts on Black Hand that I don't entirely agree with as you'll see when you compare our reactions to BH, but they are as usual interesting and well-executed.

And Dan at the Down Beat suggested this post with his review of the current Black Hand saga, which sounds like it positively wallowed in William Hand's resentment towards his family. Yeeesh!