Picking up with IM #7, we discover that the Maggia is almost ready to attack Stark's plant, but they've got to figure out a way of dealing with Iron Man. The Gladiator (longtime Daredevil villain) volunteers to handle Shellhead.

Jasper Sitwell is still angry over Iron Man kayoing him in the previous issue (to prevent him from getting killed by the Crusher), so mad that he forgets about security: 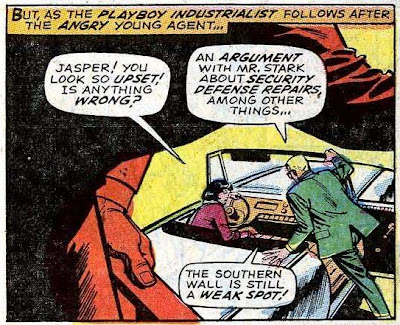 Later, as they are touring the Cord facilities, the Gladiator and Big M kidnap Stark, Janice and her lawyer, as a ruse to get Iron Man to come save them, not knowing that with Tony a captive he can't change into his metal suit. This forces Tony to escape even though he's been warned that this will result in the death of Janice and the lawyer: 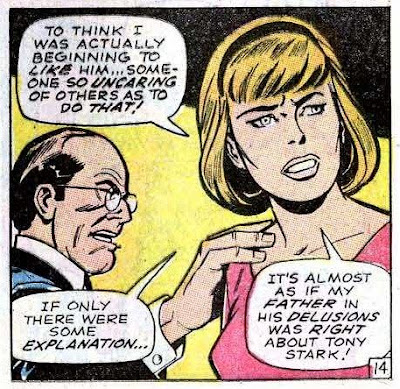 But Iron Man appears before the Gladiator can kill the pair and they have a good fight. Meanwhile, Big M and the rest of the Maggia attack Stark's plant through the southern wall. But Big M is conflicted by her romance with Jasper Sitwell, and in a flashback we learn how she became the head of the Maggia.

She had been the daughter of a very wealthy financier and lived the jet-set lifestyle among the beautiful people. She had a successful and politically ambitious boyfriend, and the sky seemed to be the limit. But when her supposed father passed away, she learned the truth; that he had been laundering money for the Maggia and, more shockingly, that her real father was Count Nefaria, the head of the mob. She initially refused to become a criminal, but when her boyfriend found out and dumped her as a political liability, she turned to her real father for training, and eventually succeeded him as Big M.

As the battle between Iron Man and the Gladiator has turned into a stalemate, the latter abandons the fight and heads for Stark's plant. Meanwhile, it turns out that Sitwell has been suspicious of Whitney Frost all along, and has prepared a trap for the Maggia. In the end, Iron Man and Sitwell defeat the Gladiator and the Maggia, but Whitney gets away: 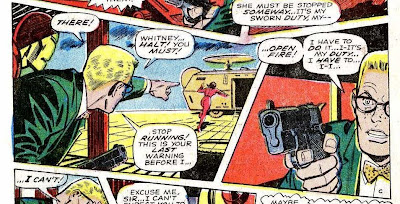 In the following issue, a mysterious villain from China has somehow gained control of the Incredible Hulk, and sends him off to kidnap Janice Cord. We also learn that Cord's lawyer, Sandhurst, has reasons of his own for trying to convince Janice to sell her father's plants. This time Tony acts fairly bravely as she's grabbed by ol' Greenskin: 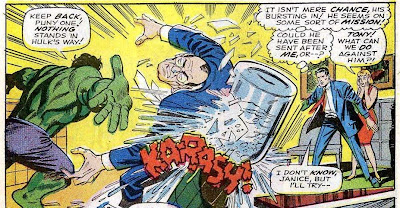 But the Hulk gets away with the girl, with Iron Man in hot pursuit. During the battle which ensues, the Hulk seems quite a bit smarter than he has in the past, using terms like "repulsor ray". In the end we learn why: 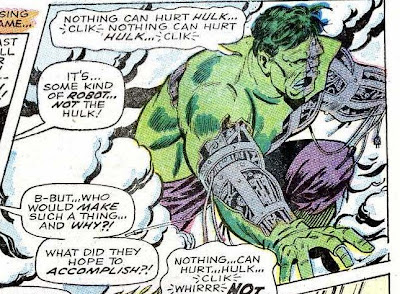 Who indeed is behind this? It turns out that the mysterious villain from China is the Mandarin. He has deduced from the fact that Tony Stark vanishes whenever there is danger just before Iron Man appears that the two are one and the same person.
As IM #10 begins, the Mandarin has prepared some phony photos, purporting to show Tony palling around with some communists. As Janice Cord and Tony are out at a nightclub a bunch of reporters and photographers burst in demanding a statement: 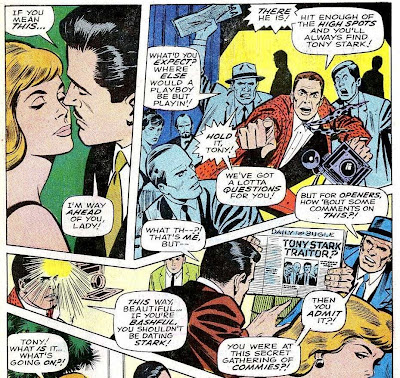 Tony quickly discovers that the photos of him with the communist agents were taken at times when he was on missions as Iron Man, and thus he has no alibi that he can present. He's contacted by a Chinese gal named Mei Lin, who advises him to come to her antique shop if he wants to find out why he's being persecuted. When he does so, he discovers the truth: 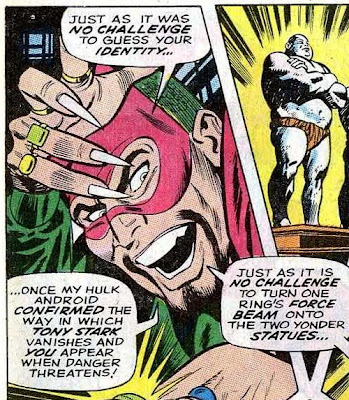 The Mandarin freezes him with a ray that stalls his circuits. But when he goes to unmask Iron Man, he gets a surprise: 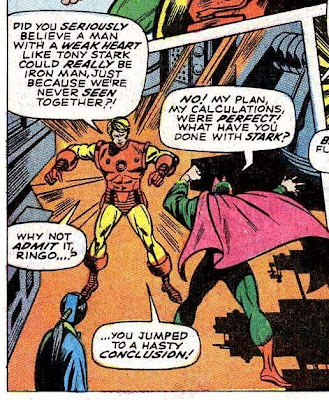 And at the same time, Tony Stark appears on the television at an upstate hunting lodge giving a press conference. The Mandarin stalks off, needing to revise his plans for this new development, leaving Iron Man paralyzed by the rays with Mei Lin.

IM goads Mei Lin into anger by telling her that the Mandarin doesn't really love her. She leaves in a rage, slamming the door and propelling a lamp into the path of the paralyzing rays. Now free, Tony removes the mask which made him look like someone else, and reveals that the Tony on the TV was actually a robot.

IM flies to the upstate lodge where the robot Tony gave his press conference, arriving just in time to prevent the Mandarin from discovering that it's not really Stark. They have a classic battle. The reporters outside, hearing the sounds of a struggle, manage to record the Mandarin admitting that the photos of Tony with the communists were faked.

His plot foiled, the Mandarin grabs Janice Cord as a hostage and summons Mei Lin with his flying escape craft. But as Iron Man tries to rescue her, the Mandarin makes a fatal mistake: 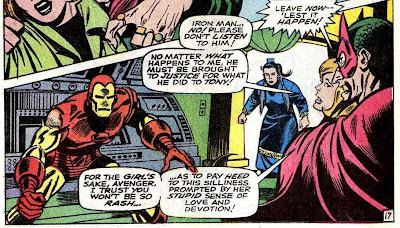 Mei Lin, realizing that the Mandarin doesn't really feel the emotion of love, steps in the way of a blast intended for Janice. As IM and the Mandarin battle, the plane they're in careens out of control and: 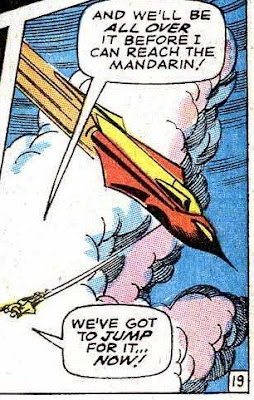 The plane crashes apparently killing the Mandarin (Mei Lin had already died from the Mandarin's blast.

However, as Iron Man and Janice return to the hunting lodge, they discover that an ambulance has arrived for Tony and he's being taken away. Will he be revealed as a robot?

Comments: Solid set of stories here, with good continuing characterization. I like that Sitwell figured out that Whitney Frost was up to no good although it does make me question then why he was so upset with Iron Man for knocking him out. Janice Cord's conflict over Tony is realistically portrayed, and her heroic plea for Iron Man not to let the Mandarin go on her account is impressive.

Although I was not initially impressed with Tuska's art, as you see see here he was experimenting with page layouts and the effect is quite pleasing to the eye.
Posted by Pat at 5:44 AM