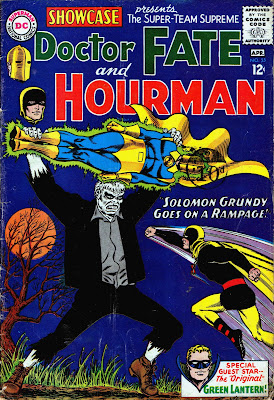 The DC Silver Age was marked by the emergence of new characters based on old characters, but with significant changes. Jay Garrick was no longer the Flash, Green Lantern's power ring didn't work against yellow instead of wood, Hawkman was a lawman from the stars, and the Atom could actually change his size.

This must have been somewhat frustrating for fans of the Golden Age. True, there started the Silver/Golden Age crossovers between the two Flashes and the two GLs, and the Justice League/Justice Society annual stories provided some real Golden Age action. But Julius Schwartz had to this point avoided bringing back the GA characters in a separate book, solely dedicated to them.

This issue changed all that. Schwartz enlisted the talents of Gardner Fox and Murphy Anderson for this issue, featuring the return of one of the more famous Golden Age villains, Solomon Grundy.

In the story we learn that Solomon Grundy had more or less spontaneously arisen from decaying vegetation in a swamp, that he'd led a criminal gang on a rampage across the country, but that the Golden Age Green Lantern (Alan Scott) had sent him away in a green bubble to outer space. Now he has returned. Can Hourman and Doctor Fate stop him on his mission of revenge against GL?

Doctor Fate's crystal ball alerts him to the presence of Grundy on Earth. Hourman (Rex Tyler) also finds out: 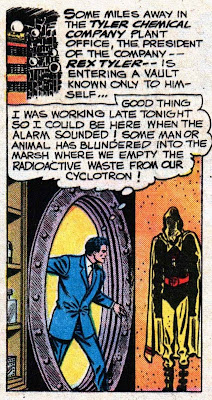 Why do I get the feeling that Rex's chemical company became a Superfund cleanup site in the 1980s?

Tyler swallows his Miraclo pill and becomes super-powered for one hour. Thus begins one of the annoying parts of the story; every time there's a panel featuring Hourman, we also have to have a clock telling us the current time. Not the information that's useful (like how many minutes are left on Hourman's hour of power), but the present time.

Obviously part of bringing back Solomon Grundy was to appeal to Hulk fans. But I confess, the "Hulk smash!" bit was a little tame compared to this: 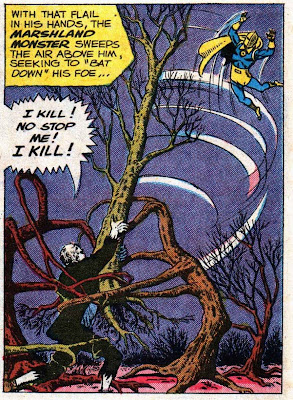 As you can see, Dr Fate arrives as well, and the three of them battle it out for a bit. But Grundy wins and so he goes into Gotham City in search of Green Lantern. GL shows up and Solly kayos him with a bunch of wood. And when Doctor Fate and Hourman arrive, they turn against each other:

But unlike a Marvel slugfest of the period, where we'd see the skills of one hero against the talents of another, this is just a brief diversion. It turns out that they knock each other out, and they realize that there's some odd interference between Hourman's Miraclo pills and Dr Fate's magic.

Meanwhile, Grundy has encountered his old gang, giving him the chance to explain how he got free of the alien world where Green Lantern had left him. A comet happened by and swept his green cage into space with him in it. By holding the sides, he was able to guide the bubble to Earth, where it smashed.

Grundy helps out his old gang by smashing a few stores open so they can rob them, then continues back to the radioactive swamp with GL. The radiation works a change on Alan Scott: 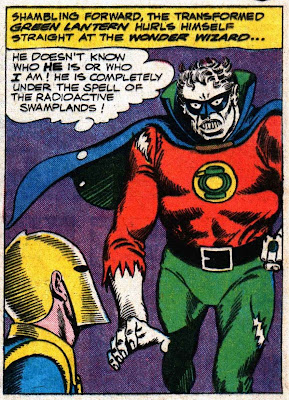 But Dr Fate is able to change him back and in the end, he and Green Lantern team up to seal Solomon Grundy in a part-power ring, part-magic bubble that they place in orbit around the Earth.

Comments: This story has all the elements of a classic: great artist, talented writer, teamup of heroes and a classic villain. And yet it falls flat. Anderson appears to be mimicking the Golden Age style (especially on the inks), but the effect is to make it look old-fashioned. The story is dull as dishwater, and the conflict between Dr Fate's magic and the Miraclo pills appears to be padding to make the story last a little longer.

Update: For a different take on Showcase #55, check out M. Hamilton's post at the Comics Bin.
Posted by Pat at 6:09 PM